A Review ~ Timing by Ashley John 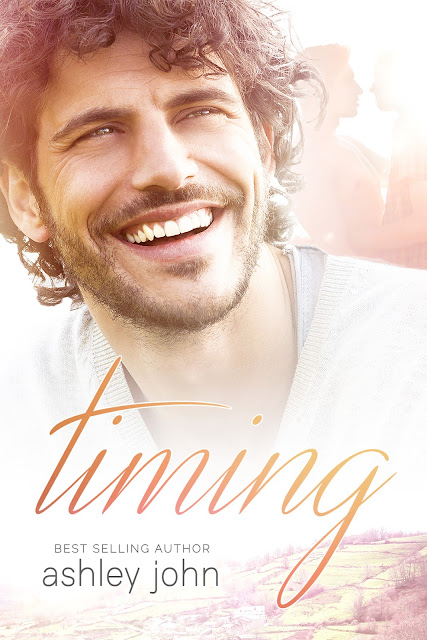 Timing, the brand new book from No.1 Bestselling author, Ashley John, is out now! You can head over to Amazon to pick up your copy (insert Amazon link here). After his Gay Romance chart topping books, BOSS, Shelter and Cabin Nights, Ashley John is back with another full-length gay romance novel!

Timing is a sweet and romantic tale of two men meeting at different crossroads in their life. To find out more about Tom and Cole, read below!

Tom doesn’t have time for a relationship – not now that his fingers are practically touching the promotion he’s spent years chasing. His weekdays are consumed by desperately fighting for his editor’s attention and his weekends are wasted alone with meals for one and his cat for company.

All Cole has ever wanted is to work on the farm he was raised on, but money is tighter than ever and he is forced to get a job in a bar to keep a roof over him and his auntie’s heads. Time is running out for the farm but he spends his days dreaming about a future he thinks he’ll never have.

After an unexpected collision at the village train station, their lives suddenly become connected when Cole clumsily spills his coffee on Tom and it sets into motion something greater. Tom is wary of listening to his heart and Cole is distracted by the threat of losing everything. Each possesses something the other desperately needs, but can they ignore bad timing to listen to their hearts?

Timing Blurb
When it comes to love, is timing everything?

Tom doesn’t have time for a relationship – not now that his fingers are practically touching the promotion he’s spent years chasing. His weekdays are consumed by desperately fighting for his editor’s attention and his weekends are wasted alone with meals for one and his cat for company.

All Cole has ever wanted is to work on the farm he was raised on, but money is tighter than ever and he is forced to get a job in a bar to keep a roof over him and his auntie’s head. Time is running out for the farm but he spends his days dreaming about a future he thinks he’ll never have.

After an unexpected collision at the village train station, their lives suddenly become connected when Cole’s clumsily spilt coffee on Tom’s shirt turns into something greater. Tom is wary of listening to his heart and Cole is distracted by the threat of losing everything. Each possesses something the other desperately needs, but can they ignore bad timing to listen to their hearts? 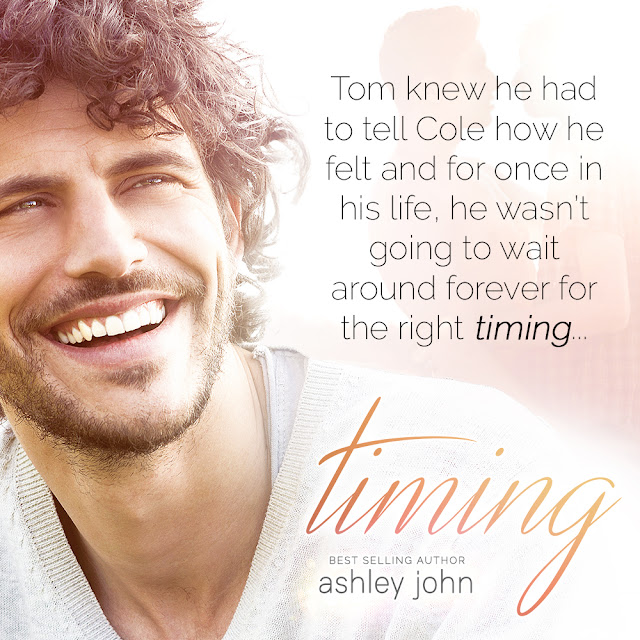 “How’s white wine?” Cole held up the bottle. “I don’t know if it’s any good.”
“Ugh, I love you right now,” Tom sighed, “because that’s just what I need.”
Cole joined Tom on the floor in front of the fire, sitting closer than he had intended to. Their shoulders touched but Tom didn’t react by edging away, so neither did Cole. He cracked the seal on the wine and filled the tall glasses to the rim, not sure what amount was the right amount. The bar didn’t seem to attract the type of people who ordered wine.
“These are champagne flutes. Points for effort, though.”
Listening to the crackling of the fire, they sipped the wine and Cole started to feel more and more nervous. The silence between them wasn’t awkward but he felt like he wanted to say something, if only to talk to Tom, to find out more about him.
“S-s-s-s-so,” he stopped dead.
Tom turned to look at him but he didn’t look shocked or horrified, he just smiled. It was a normal smile without the usual subtext of pity. That eased Cole.
“Sorry, let me try that again.” Cole exhaled, his cheeks burning but not from the heat of the fire. “So, how old are you?”
“Twenty-six, which, according to Ricky, means I have four years until my gay death.”
“Ricky talks a lot of shit.”
“Yep,” Tom laughed, “I’ll drink to that. What about you then? Charming boyfriend in the city? Girlfriend? Both?”
Tom suddenly stopped talking and sipped his wine quietly. He dragged his knees up to his chest and stared dead again at the fire.
“Nope. Single. Waiting for the right guy.”
Tom nodded and said, “Awesome.”
“What about you?”
“Me?” Tom practically choked on his wine. “I’m too busy for all of that.”
“By ‘all of that’ do you mean love and relationships or sex?”
“All of the above? I work my arse off at work to try and get ahead and it doesn’t pay off. Do you want to know what my big Friday night plans were? I was going to go home and watch The X Files with my cat, drink a glass of cheap white wine and fall asleep with a pizza on my knee. How depressing is that?”
“That,” Cole said with a nod, “sounds like my kind of night.”
Stretching out, Cole reached across the sofa cushions, his arm going around the back of Tom’s shoulders. He didn’t realise what he was doing until he was there but he knew it would look even stranger if he quickly retreated. He left it hanging on the cushions, straining his shoulder so that his arm didn’t touch the back of Tom’s neck or the quickly forming thick curls as they dried.
“Are you feeling warm yet?” Cole’s fingers instinctively wrapped around Tom’s shoulder to give it a rub and they both turned to stare at them.
“Cole, I -,”
“I’m sorry.” Cole quickly pulled his hand away. “I don’t know why I k-k-k- - for f-f-fuck’s sake!”
He put his wine on the floor and hid his embarrassment by planting his hands firmly on his face. Under his touch, his flesh burned hot and he felt like a fool.
“This damn stutter,” he mumbled through his fingers, “it only ever comes out when I’m n-n-nervous.”
Grunting in frustration, he ripped his hands away and planted them in his lap, staring straight down at his fingers so that he wasn’t looking at Tom to see his own embarrassment reflected.
Instead of judging, Tom simply asked, “Why are you nervous?”
Cole thought for a second, trying to think of a way to word it but he knew the only way was the truth. Turning to face Tom, whose face was soft and open in the dancing firelight, Cole wondered if he should say the words that he felt deep in the pit of his stomach.
“Because I really like you.”
They silently stared at each other as Cole waited for Tom to react. One part of him expected Tom to laugh and the other part of him expected him to get up and leave. The storm was still battering the side of the farmhouse, which meant that the second option was less likely. When Tom closed his eyes and leaned in, the first option seemed just as unlikely.
Tom’s lips brushed gently against Cole’s and it felt as though time stopped around them. Cole couldn’t hear the wind and the rain shaking the old windows, nor could he hear the crackling fire as it warmed up the room; all he could hear was the beating of his shuddering heart in his chest.
The kiss was delicate and it was over as quickly as it had begun. Tom pulled away, his teeth nibbling as his lip and his brows downturned at the edges.
“I like you too,” Tom’s voice was barely above a whisper, “but I haven’t done this in a while and I don’t want to rush into anything.”
“I wasn’t going to rush you.”
“Good,” Tom sipped his wine with a small smile before leaning into Cole’s side.
At first his body was rigid against Cole’s chest but he seemed to settle into a space that seemed as though it had been perfectly made for Tom’s body. Pulling him in close, Cole smiled down at Tom as he stared ahead at the fire. His curls had dried and one hung limply over his eyes. Reaching out, Cole brushed it to the side so he could see Tom’s eyes. He looked up at Cole and he smiled back nervously.
Cole had no idea what they were doing or where it was going but he knew that it felt so different to his usual hook-ups and he liked it. 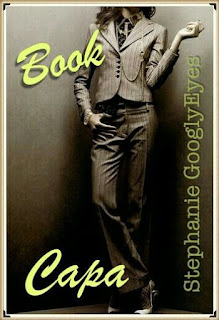 What a sweet, sweet book full of awesome characters

At first I didn't know what to make of Tom, as he was very frigid. His friendship with Ricky aka Kitty Litter was an odd one as well. I can't tell if Ricky is a great friend to have, or a bad one. On a side note, i really hope he gets his own book. I bet his story is sad as hell and he NEEDS an HEA!

That all being said. The way Cole and Tom meet is a bunch of unfortunate, but funny circumstances. First with the coffee down the shirt, then the drink in the lap, Cole's clumsiness is really endearing. I think that's part of what draw Tom in. Cole’s sincere-ness and Innocence. Coles hot and buff but he doesn't flaunt it. He's an understated beauty and an all-around great package.

Tom is a workaholic who doesn't have time for anything or anyone, so it's rare that Ricky can get him out and he's kind of amazed that he wants to find time for Cole. When he finally finds something n other than work to focus on, things really start to even out for Tom. I also loved Tom's X-File fetish. It gives him some depth, other than being the guy who likes to work and seems kind of cold.

There is some minor drama in this book, but not overly so. I think this is such a nice sweet read, one that you need when you need to get away from all the drama and just want an awesome happy ending.

Tom and Cole are some of my new favorite characters and again, I reeeaaaallllly hope Ricky gets a book!!

p.s. loved the Shelter plug that was thrown in here ;) 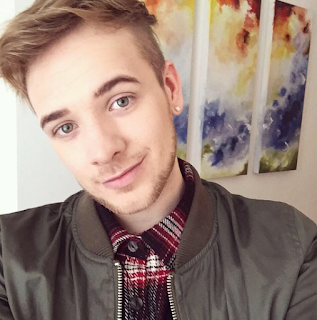 Ashley John is a young gay author of gay romance novels. Living in the north of England with his fiancé and two cats, Ashley John spends his days writing down the voices he hears in his head. His books are primarily romance dramas with sprinklings of erotica and he has a knack for making you feel like you're living right beside the characters he creates. Ashley John is also a keen artist and he puts his artistic side to designing all of his own covers.