The Brave Line by Kate Stewart 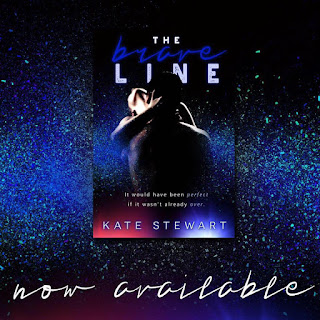 She is a five foot seven long list of things he can’t have.

He is a determined cop, desperate to keep his heart sealed behind his badge.

Michelle is a survivor. With a fresh perspective on life, she trades her tragic past in California for the coastal waters of Charleston. Fueled by a new career as a dispatcher, she’s determined not to let her scars weigh her down. She apologizes for nothing, especially her insatiable need for a certain police officer.

Rowdy is a newly minted sergeant dedicated to his job, but the life of a Charleston police officer has never been more dangerous. With his need to take order of a city spiraling out of control, the last thing he wants is an entanglement with a mouthy dispatcher. But, there’s just one problem. He can’t get enough of her.

As the heat rises between the unlikely pair, so does the tension.

Three months of summer was all it took to shake their foundations, rattle their walls, and bring them crashing down.

It was lust.
It was love.
It was real.

And it would have been perfect . . . if it wasn't already over.

*Note to reader:
This book has several elements and explores topics that some may consider triggers. For mature audiences only. Explicit sex, violence, and language.

This was such a realistic story; having worked in the law enforcement arena for nearly 20 years, I think I can say that with honesty.

Michelle works as a 911 Dispatcher in Charlotte; Rowdy is the sergeant on her shift and she's been pursuing him for quite a while, however Rowdy doesn't screw around with people from work....ever. One hot night, all that crumbles and we're left with their story.

Both Rowdy and Michelle have horrors in their past; Michelle refuses to let her violent past dictate her life, while Rowdy can't seem to let go of his demons, despite the fact that none of them were his fault. I liked that Michelle knew what she wanted and she wasn't willing to settle for less. She was careful with how she proceeded in her relationship with Rowdy, as not to spook him off. Rowdy is having a hard time believing that Michelle is everything he didn't know he wanted or needed in his life, and he nearly messes all that up with his stupidity and stubbornness.

The police scenes that played out were very realistic, both in how they were portrayed and by how people responded to those situations. Officers trust their gut every day, and rarely does it lead them the wrong way. It was also realistic because it didn't portray all of the officers as the stand-up guys that 99.9% of them are....there's always the one who slips through, as is the case in any profession. It's up to us to see that the one bad apple doesn't spoil the whole barrel, which is depicted quite nicely in the scene with Kenneth (despite the crowd's actions).

Overall, this was very well-written and it was a story I thoroughly enjoyed.

The Brave Line is the story of Rowdy; a newly minted police Sgt. and Michelle; a dispatcher that gets under Rowdy’s skin. If you have read the Balls in Play series you will recognize these two but this is definitely a standalone.

Michelle has made it clear for a while that she wants Rowdy but he doesn’t sleep where he works. These two keep dancing around each other until one night they finally give in. They continue their dance for a while but it’s not long before they are back in each other’s beds. But they both hold firm to sex and nothing more.

I have to say Michelle is pretty high on my list of favorite heroines. I love a strong heroine and she doesn’t back down. I also loved how she owned her sexuality and it just made her more badass. Michelle loves fast cars, hot and dirty sex, and living life to the fullest. She has made a new life for herself after an attack and she refuses to let it define her. Most romance heroines are written to be constantly afraid and the alpha male comes in to save her. Michelle doesn’t need that; she is her own woman and is in control. Michelle still believes in love and getting the life she wants even though she went through a scary experience. She knows Rowdy can break her heart but it’s not long before sending Rowdy out on calls starts to affect Michelle and she waits for his check in each night.

I really liked Rowdy too. I understood his fears because he has suffered more than one loss; so his actions made sense to me. He had a lot of baggage to wade through. Rowdy and Michelle were explosive together. They were dirty and hot and they were fun. He was the hard cop and she was the fire he can’t control. I loved that Michelle understood Rowdy and knew where his head was at. She waited him out even though it hurt and she put him through hell when he deserved it. These two were perfect for each other.

I loved the authors detail on the life of a cop and how we got to read about Rowdy in action day to day. I am not familiar with this life but I felt the fear the dispatchers had as they sent police out on calls. This story had a lot more depth than I was expecting. I thought the add in of current events brought in some realism to the story. This is definitely one of my favorite Kate Stewart books and the best cop romance book I have ever read. Well Done!