RELEASE BLITZ & REVIEWS - A CHARM OF FINCHES by Suanne Laqueur A Charm of Finches
Suanne Laqueur
Release Date: November 1, 2017
Synopsis
From the author of An Exaltation of Larks comes the long-awaited second book in the Venery series.

“I swear. Give me one more chance, and I will make the most of it.”

Ex-escort Javier Landes is asking for his third chance at love. The third time proves to be the charm when he meets an art therapist named Steffen Finch. What starts as casual deepens into a passionate relationship—everything Jav has ever wanted, and everything he fears losing.

Stef’s business card reads Curator & Sailor. His creativity and insightful nature have made him into a talented therapist, the one to call for tough cases. His professional success can’t conceal a deep need to connect with someone, but Javier Landes is the last person Stef expected.

Geronimo "Geno" Caan is Stef's most challenging case. To cope with his ordeal, he's allowed an alter-ego called Mos to make decisions, and now lives a double life within a web of lies. Under Stef’s navigation, Geno uses art to express what he can’t yet speak aloud. But as Geno’s attachment to Stef gradually extends to Jav, the boundaries between professional and personal begin to blur.

Over the course of a year, Jav, Stef and Geno form an unexpected and unconventional triangle, revealing how men make love in times of war and how love is a great wisdom made up of small understandings. A Charm of Finches is an epic tale of survival and secrets guaranteed to make you think and feel and remember.


Add to Goodreads
Add on Goodreads 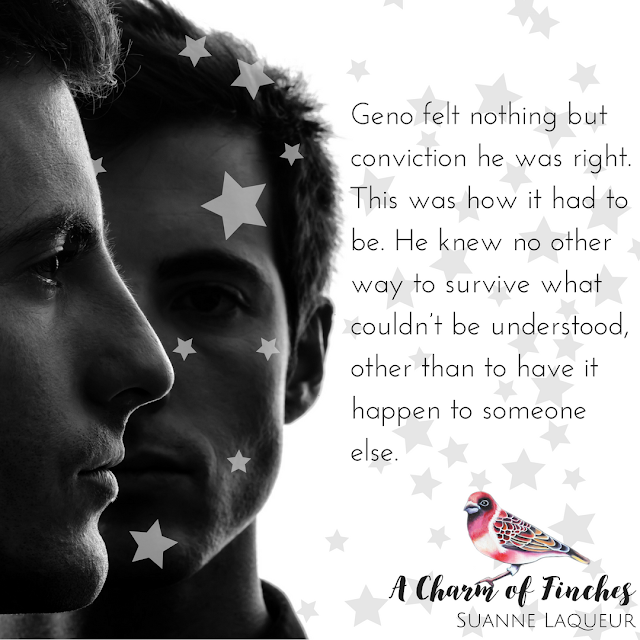 I can’t even put into words how heartbreaking and magical Suanne Laqueur’s words are. Any review I write won’t compare to A Charm of Finches but I will write one anyway. After finishing An Exaltation of Larks I was desperate for Javier to find his HEA. I am so glad I got to read Javier’s journey. In the end I got so much more than that.

Javier Landes is hoping for his third chance at love. He has been extremely unlucky but that finally comes to an end when he meets Steffen Finch. Both men have had encounters with other men (Steffen more so) but neither have committed to relationships. Javier has lead the life of an escort so pursuing this part of him has been off the table until now. Each time he even made an attempt it crashed and burned. Steffen and Javier were so easy together. They just fit each other perfectly. I really loved the progression of their path to love. While they were both cautious they were also sweet and adorable together.

The real star of a CoF was Geno Caan. The story opens with Geno being betrayed by someone he loves. As a result of this betrayal he suffers immensely. On top of the horrific acts done to him he suffers some devastating losses in his life. This changes Geno and he is incredibly broken. After some attempts to find normalcy again he ends up becoming Steffen’s patient. I am a pretty de-sensitized reader but I have to say reading about what Geno went through was gut wrenching. As Steffen treats Geno and you get more details it destroyed me. I have never rooted for a character more to come out the other side a whole person. Geno deserved to get his life back and Suanne Laqueur did a beautiful job telling his story.

SL creates some unforgettable characters in a Charm of Finches but I was completely enamored with Steffen Finch. He was such a patient and loving person. From his care with Javier’s heart to his therapy methods with Geno I found him to be a fascinating character.

Thank you Ms. Laqueur for your beautiful words. I cannot wait for what you have in store for us next. Never stop writing.

AMY'S REVIEW
5+*
I’ve been eagerly anticipating Jav’s story since finishing An Exaltation of Larks and I was not disappointed in the least. Jav has continued writing and looking for that one person that will make him feel desired and whole. He’s tried dating, but nothing seems to really keep his interest….until he meets Steffen Finch. Steffen is a counselor and art therapist, dealing with victims of abuse. Stef and Jav meet by chance, but it doesn’t take long for both men to realize that they’ve found something special in each other.

But this story is also about a boy named Geno and his struggles with his identity and feelings after surviving a horrific incident. While we don’t get all the gory details, we get enough of them to feel Geno’s pain and the betrayal he felt knowing his twin brother willingly offered him up. Geno struggles to find his way and hides behind a mask so those around him won’t see how much he’s struggling. Geno struggles for months before making a rash decision, which eventually leads him to Stef’s care and also into developing a friendship with Jav.

Stef keeps his private and professional lives separate, but when the two collide, it causes a range of emotions on both sides. Stef and Jav are tested, but really learn to depend on each other and to work through things instead of keeping them locked inside. While Stef can’t give details of his work to Jav, he can unload the stress of the day with Jav, which helps immensely.

I loved that Jav didn’t hide who he was from Stef. He didn’t try to hide his past and didn’t make excuses for the way he lived life. He showed Stef all of his secrets and trusted that Stef would take the utmost care with the information he shared.

Geno makes some connections that really help to him focus on the positive in his life and to see that what happened to him wasn’t his fault. His conversations with Micah are so poignant and heartfelt and I’m so, so glad that Micah shared his story with Geno. Despite their hiccup, Geno reaches out to Stef when he needs it most, and Stef (and Jav) don’t hesitate to help Geno out and bring him back to feeling safe.

This book had my emotions running the gamut, but it was worth every feeling I had along the way. Suanne Laqueur writes a beautiful story and I can’t wait to see what she comes up with next. 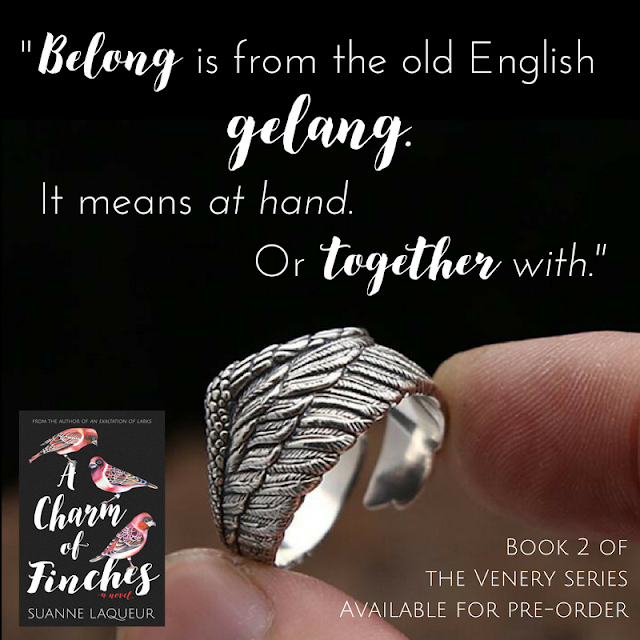 
A former professional dancer and teacher, Suanne Laqueur has gone from choreographing music to choreographing words. Her goal is to create a new kind of emotionally-intelligent romance that appeals to the passions of all readers, crossing gender, age and genre.

Laqueur graduated from Alfred University with a double major in dance and theater, and taught at the Carol Bierman School of Ballet Arts in Croton-on-Hudson for ten years. An avid reader, cook and gardener, she started her blog EatsReadsThinks in 2010. She lives in Westchester County, New York with her husband and two children. Visit her at http://suannelaqueurwrites.com. All feels welcome. And she always has coffee. a Rafflecopter giveaway
Posted by The Dirty Book Girls at Wednesday, November 01, 2017