Review Infinity + One by Amy Harmon 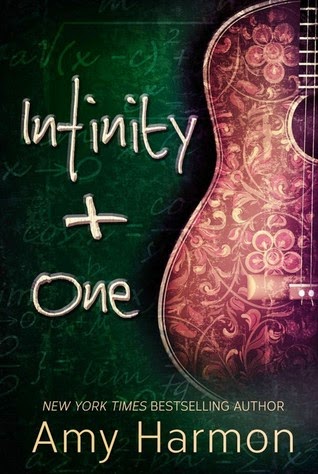 Finn Clyde is a nobody. He’s broken. He’s brilliant. He’s impossibly cynical. And all he wants is a chance at life.

One girl. One boy. An act of compassion. A bizarre set of circumstances. And a choice – turn your head and walk away, or reach out your hand and risk it all?

With that choice, the clock starts ticking on a man with a past and a girl who can’t face the future, counting down the seconds in an adventure riddled with heartbreak and humor, misunderstanding and revelation. With the world against them, two very different people take a journey that will not only change their lives, but may cost them their lives as well.

Infinity + One is a tale of shooting stars and fame and fortune, of gilded cages and iron bars, of finding a friend behind a stranger’s face, and discovering love in the oddest of places.

Amy Harmon is a USA Today and New York Times Bestselling author. Amy knew at an early age that writing was something she wanted to do, and she divided her time between writing songs and stories as she grew. Having grown up in the middle of wheat fields without a television, with only her books and her siblings to entertain her, she developed a strong sense of what made a good story. Her books are now being published in several countries, truly a dream come true for a little country girl from Levan, Utah.

This is my second Amy Harmon book. The first was Making Faces, which has made it onto my top-ten-faves list. So of course I gave Infinity + One a try too!
The story of Bonnie & Clyde is something we all know about, we've heard this and that, songs and movies have immortalized the two as notorious criminals that lived hard and died young. But not everyone stops to think about them as people, as two persons that met and fell in love with each other and, even though they were riding hard on the wild side, they were together. They were in love. They had each other and didn't care about anything else.

"They were young, wild, and in love, with little regard for anything but each other."

Infinity + One is only loosely based on Bonnie & Clyde's story, but the premise, the base is still the foundation. They too met and rode away together, only to experience certain things and fall in love. Difference was that Infinity + One is set in the 21st century and Bonnie is a well-known singer.
Being as I've read Making Faces, I wasn't expecting unicorns and rainbows from this story. It's not a light, fluffy read. It makes you ponder on this and that, even though, well, there were certain scenes that were sort of unbelievable, it still didn't take anything away from the story.
Bonnie was a girl that went through too many things and being manipulated by her grandmother, she couldn't properly live her life the way she should have, she couldn't cry and mourn, and grieve or stop to take care of an issue because the only thing that counted was that she had to sing. Lemme tell you, there were instances I wanted to throttle the grandmother. Old hag.

Now, Clyde. Finn. Infinity James Clyde. Oh Lord. I have to admit, the fact that he's big and blond also swayed me into reading the book. What can I say, I like my guys big, blond and badass. Finn was all that, plus a genius. You see, he was good at Math. Really good. And even though I'm totally on the wrong page with Math - and anything that's not related to arts and stuff - I would still sit and listen to him talk about Math being related to this and that, and his numbers and whatever. I would have sat and sighed, and swooned and peacefully fallen asleep with my head on his lap. Gotta love a badass geek!

All in all, aside from the few less-than-believable scenes, the moments that I wanted to hurt the grandmother - if you'll read the book, you'll see exactly why, what she did was cruel - I really liked it. I give it 4 stars and I recommend it to anyone because, in my opinion, what Amy Harmon writes is not just one specific style and for a specific reader.