~REVIEW~ Try Not to Breathe by Holly Seddon 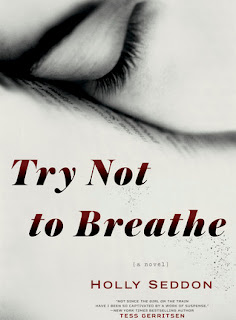 Try Not to Breathe by Holly Seddon

This is a very well-written debut novel by the author. The story is told from three separate points of view, which was refreshing, and suprisingly easy to follow.

Alex is a journalist who is writing a story on therapy being conducted at a hospital. They're testing a theory that people in a coma-like state can actually communicate with the outside world, albeit rather basically (ie, yes and no), depending on how their brain waves react. Alex also has a very nasty addiction to alcohol, which has cost her dearly, by losing her husband and miscarrying a child. She was also fired from her previous job due to her alcoholism. While at the hospital she comes across a patient, Amy Stevenson, who was attacked 15 years ago and is a patient of the hospital. Her attached, up until this point, has never been solved. Alex becomes engrossed in Amy's story and becomes determined to solve this crime.

Amy Stevenson is the patient. She's been in the hospital since being transferred there shortly after her attack. We get her POV from flashbacks, and from what she believes are dreams she's having. It takes a while, but Amy finally realizes her situation and does her best to communicate and help capture her attacker. While her view of the situation is very limited, she is able to convey quite a bit of information.

Jacob Arlington was Amy's boyfriend at the time of her attack. He's now married and expecting a baby with his wife, but he visits with Amy every day, a fact he keeps from his wife. He visits her because he feels guilty that his life has been able to move on, while Amy's hasn't. He's working with Alex to try to figure out Amy's attacker. He's quite a likable guy, and you feel bad for him in so many ways.

This was quite a good story. The only drawback I see, is the e-book price. For a new author, $12.99 for an e-book seems excessively high. Unfortunately, I think people may skip over this book due to the price, and that would be a shame because it is a wonderfully written story.

Brilliant mystery. Excellent writing. I was on the edge of my seat. I had my theories over who was Amy's attacker but the reveal blew me away. I'm impressed as hell that this is the author's first novel. The story takes place in England. Three povs:1. Alex - a divorced alcoholic who is a freelance journalist trying to sort out her life while investigating Amy's attack that happened fifteen years ago. 2. Jacob - Amy's high school boyfriend who is married with a baby on the way but still sits with Amy in secret a few times a week. 3. Amy - She was abducted and attacked and left for dead when she was just fifteen years old. Technically, she's in a vegetative state but she's also shown signs of brain activity and specialists believe she is "aware" to an extent. I loved Amy's pov. My only criticism is the pricing for the ebook. $12.99? Really? I wish the publishers would reconsider because a lot of people are going to pass and it'd be a shame to miss out. I loved every word. Bravo!


**Both reviews received copy courtesy of publisher via NetGalley**