BROKEN GOD by Nazarea Andrews is now live!
This is an adult, contemporary fantasy novel. 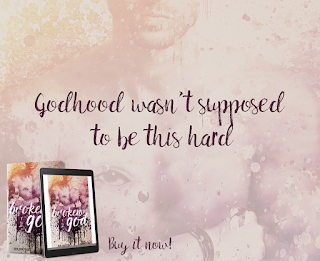 Power is a strange and broken thing.

He was the sun god, the god of healing and song.
And prophecy.
Apollo has lived alone for centuries, content to spin out the years wandering a new and strange world, lost in the past and endless versions of the future. He has cut all ties with the remains of Olympus and his power, and hidden himself in humanity.
His twin thinks he’s depressed, spending his time in coffee shops, hospital waiting rooms, and concert halls…and nothing matters. Not really.
Until her.
Iris. With her teasing mouth and soulful music and eyes that remind him of the past.
He can’t resist her smile.
A girl as wild as he was, once, with a poet’s tongue and the body of a siren, who for one night makes him forget all the years and everything he gave up.
And he can’t stop fate.
Gods knows he’s tried.
He can’t help taking her.
Even if he knows better.
When Iris wakes up screaming, caught up in visions of the future, Apollo realizes that he didn’t leave his power quite as far behind as he thought.
He’s the god of prophecy and he’s been running from it, for centuries.
Iris is everything he has to avoid.
Now he has a furious Oracle on his hands, his sister trying to fix him, and someone is killing the gods.
It’s not just his tenuous sanity that hangs in the balance this time.
It’s all of Olympus.
Godhood really wasn’t supposed to be this hard. 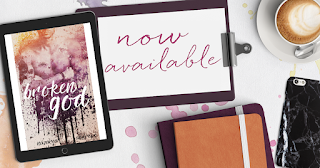 Artemis slams through the door.
She is still wearing her ceremonial garb. Her hounds are seething at her sides, and her eyes are cold and deadly as she storms through the door of my apartment and into the tiny kitchen with all the force of a midnight storm. Just as cruel and cold and devastating.
"Artie," I say, my voice dry and vaguely annoyed.
She ignores me, stalking closer to Iris, who sits still and wide-eyed as a goddess examines her for faults.
I'm kind of absurdly proud of my girl for not squirming under that gaze. I've seen fucking Hades squirm under it. My sister is a sweetheart, for sure, but she's also the goddess of the hunt, and she's a fucking force to be reckoned with.
"What the fuck are you doing with my brother?" she snarls, her voice low and deliberate. Like the quiet pad of a predator stalking its prey.
"I think I'm having coffee, if he ever remembers that's what he was supposed to be doing in the kitchen," Iris says, giving me a dirty look.
I jolt into action and watch from the corner of my eye as Artemis stares down at my new Oracle.
"What favor did you extract for this power?" she snaps, furious. She's almost shaking with it and for a heartbeat, I wonder if Iris will be the exception to this rule, too.
My handmaidens are toys to be played with and broken. My priests are the same. I've never lifted a hand to stop Artemis from venting her anger against my chosen.
But my Oracle has always been untouchable. Maybe it's because she knew Del, the first one, and she has a sentimental streak (that she vehemently denies) or maybe it's because she doesn't want to test me. Doesn't want to pit her considerable strength against my own.
Maybe it's a simple as she knows that my Oracle is special to me, and won't raise a hand against her because she doesn't want to hurt me.
Whatever the reason, my Oracle has never been touched. Has never been harmed. Not by Artemis. But now, watching the way my sister bristles and snarls, and stares at the unblinking Oracle in her sun chair, my kitten in her lap, I wonder if now she will.


Artie has spent most of the past few thousand years, worried about me and tending to me in my madness. An insanity brought on because I am an idiot and refused to listen when Del said, so many years ago, that some prophecies are not meant for even me.


---------------
Nazarea Andrews' Bio:Nazarea Andrews (N to almost everyone) is an avid reader and tends to write the stories she wants to read. Which means she writes everything from zombies and dystopia to contemporary love stories. When not writing, she can most often be found driving her kids to practice and burning dinner while she reads, or binging watching TV shows on Netflix. N loves chocolate, wine, and coffee almost as much as she loves books, but not quite as much as she loves her kids. She lives in south Georgia with her husband, daughters, spoiled cat and overgrown dog. She is the author of World Without End series, Neverland Found, Edge of the Falls, and The University of Branton Series. Stop by her twitter (@NazareaAndrews) and tell her what fantastic book she should read next.Author Links:Site - http://www.nazareaandrews.com/Blog - http://www.nazarea-andrews.blogspot.com/Twitter - https://twitter.com/NazareaAndrewsFacebook - https://www.facebook.com/NazareaAndrewsAuthor/Street Team - https://www.facebook.com/groups/427502530700422/ Newsletter - http://eepurl.com/MtHwj

Posted by The Dirty Book Girls at Tuesday, September 27, 2016