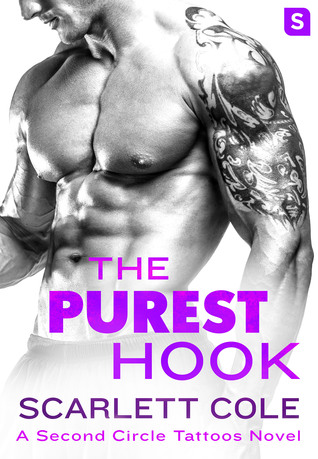 Can a love built on secrets survive?

Rugged, hot, and rock hard, Dred Zander is exactly the type of man that normally sends Pixie running. Not dreaming about running her hands down his washboard abs...and lower. The lead singer and guitarist for the band Preload embodies trouble behind his quick smile and guarded eyes, and Pixie left trouble behind her years ago along with the name Sarah Jane Travers and the pathetic trailer her mom called home. With her abusive past in her past, she has a new life, a new family at Second Circle, and a dream of opening her own business. She needs capital and time. What she doesn't need is a tempting long-haired rocker or the paparazzi that follow him around.

But Dred has other ideas. Pixie's sweet hazel eyes, purple hair and kaleidoscopic tattoo of exotic flowers that swirl up her arm haunt his dreams, and he knows she wants him too. He just has to convince her. But as a juicy exposé threatens to expose their pasts, and a blackmailer terrorizes their present, Pixie and Dred have to decide what really matters and fight like hell to keep it.

I love rock stars, I love this series so of course I was eager to read this book. I was not disappointed.

We've met Dred Zander, rock star and Pixie, manager of Second Circle Tattoos in previous books. Dred did a TV show with owner of SCT and he was in lust with Pixie.

I loved their back-and-forth, him always asking her out on a date, her always saying no in a really funny way. Of course that she finally caved - can anyone really blame her? - and that's how it all started.

"He was going to woo the crap out of this woman before he took her to bed for the first time."

Both of them have had nasty pasts and childhoods; both of them were broken but doing their best to heal, individually and then, together. As a couple. Dred is pretty darn amazing and I couldn't help but fall for him. I have to also admit, him and Cujo are my absolute favorites.

But of course that I loved Pixie too. She's a fighter, a survivor. Yes, there was a little tension and some drama - just the right amount - and I wanted to shake some sense into her, and then Dred did something that made me want to smack him, but as soon as they both communicated and actually shared, all went well. There were the hot scenes - mmmm - but also ones that absolutely melted me and made me swoon. You'll see what I'm talking about if you read the book. And I do recommend that you do.

I'm actually hoping - really hoping - the other guys in Dred's band will also get their stories told. So many secrets need to be shared, so many demons need to be confronted. Those stories would be awesome, just saying.

"Your sibling is your sibling, and you just need to make it work. Her thought was why should group homes be any different?"

These are all the hints I'm going to give, it's just too good of a book not to be read. 5 stars and this baby will be reread. Many times, I'm sure.

When Scarlett isn't writing, she spends her time reading, hoarding mason jars, and working out to off-set an epic sour candy habit.

Having travelled the world for work and fun, Scarlett is a citizen of both Britain and Canada. A true city-dweller, she considers Toronto and Manchester home and likes to set her books in vibrant locations such as Miami and Los Angeles.