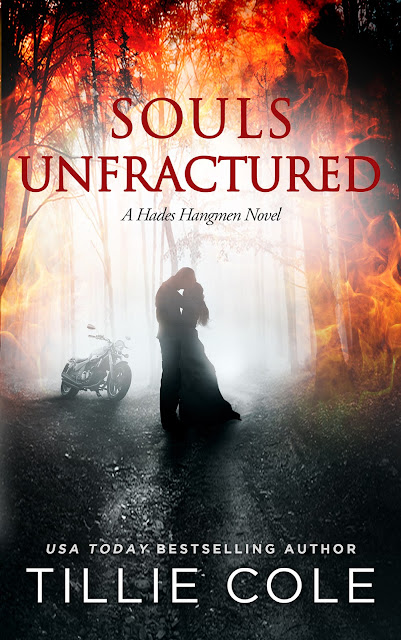 "For fractured souls are like magnets.
Drawn to collide into an impossible bliss…"

Labeled a ‘Cursed’ woman of Eve from birth, Maddie has endured nothing but pain and repression at the hands of The Order’s most abusive elder, Moses. Now living with her sister in The Hangmen’s secluded compound, finally, Maddie, is free. Free from the suffocating faith she no longer believes in. Free from endless years of physical and mental torment.

At age twenty-one, the timid and shy Maddie is content to live within the confines of her new home—safe from the outside world, safe from harm and, strangely, protected by the Hangmen’s most volatile member; the heavily pierced and tattooed, Flame.

The man who ceaselessly watches over her with his midnight dark and searing eyes. The man who protects her with a breath-taking intensity. And the man who stirs something deep within her numbed heart.

But when circumstances conspire for Flame to need HER help, Maddie bravely risks it all for the broken man who has captivated her fragile soul.

The Hangmen’s most infamous member, Flame, is ruled by one thing—anger. Plagued by haunting demons from his past, an all-consuming rage, and isolated by an abhorrent hatred of being touched, Flame's days are filled with suffocating darkness, pierced only by a single ray of light—Maddie. The shy, beautiful woman he cannot purge from his thoughts. The woman he has an overwhelming need to possess…
... the only person who has ever been able to touch him.

Flame’s mission in life is to protect Maddie, to keep her safe. Until a trigger from his troubled past sends him spiraling into madness, trapping him in the deepest recesses of his disturbed mind.

His Hangmen brothers fear that Flame is beyond saving.

His only hope of salvation: Maddie and her healing light.

The hand resting near her head inched forward in my direction. I stopped breathing as I thought she was going to touch me. But her hand stopped about an inch from mine.
I wondered what she was doing, when she said, “I like how your hand looks next to mine. It is so big and mine is so small. Yet I feel they look compatible.”
I focused on our hands and noticed that my hand was bigger than hers. Maddie’s little finger then extended, landing right next to mine. I thought of ripping my hand away, but something stopped me. I didn’t want her to touch me; I didn’t want her to be hurt. My touch only ever caused people to be hurt. But I left my hand where it was, our little fingers staring at each other.
“I sometimes imagine what our hands would look like, touching. What they would look like with our fingers intertwined. I wonder if it would make me smile. At times I daydream that it would be something we could do.”
Maddie’s voice was so quiet as she spoke. I couldn’t take my eyes off our hands. I tried to picture in my head what she described. I saw her hand reaching out for mine, but then I thought of how it would make me feel, and I shook my head.
“Our hands can’t ever touch. I can’t… I couldn’t do it.”
Maddie’s lips pulled into a half smile, but water filled her eyes and her voice hitched.
“Why are your eyes filling with water? Why is your voice breaking?” I asked, confused. I had to understand what she was thinking. What she was feeling. I didn’t know, and I had to.
“I am sad, Flame. It makes me sad to know that we can never touch.”
The muscles in my stomach pulled tight with the knowledge that I’d made her sad. Then that warm feeling I’d felt cooled and I no longer felt good. “I don’t want to make you sad. Not you. I just can’t be touched. It makes the flames worse. I can’t touch you.”
“It is okay, Flame,” Maddie said in response, then she looked up at me and added, “Because I cannot be touched by a man either. But I dream about it regardless.” 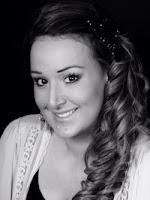 Tillie Cole is a Northern girl through and through. She originates from a place called Teesside on that little but awesomely sunny (okay I exaggerate) Isle called Great Britain. She was brought up surrounded by her English rose mother — a farmer’s daughter, her crazy Scottish father, a savagely sarcastic sister and a multitude of rescue animals and horses.

We've met Maddie and Flame in the previous books. Maddie was saved from a crazy fanatic cult, where life was... God, it was horrible. Their beliefs were sick and twisted, it made your skin crawl just by reading what those "God-fearing" men did to the women. Because of course that woman was beneath man; of course that man could do anything to the woman. And God, they did. Every imaginable horror.

Maddie... she's tougher than everyone thinks. Why? Because she's a survivor. The things she went through, yet she's not broken, and we've all known this since we've met and got to known her, a little.

In this one, we see just how strong she truly is. Because Flame? That poor bastard is broken beyond belief. Or, so we think.

This book tore my heart out, stomped it into the ground, then picked it up, dusted it off and nursed it back to health and life. That's exactly what the story of these broken characters did to me. The feels ranged from crying-my-heart-out to smiling and chuckling.

I love how well Tillie Cole developed both of them. It's a slow process, their healing, but it's a sure thing. Together? They're strong and just... so cute, you get teary-eyed. Well, I did.

It's an emotional read, one I recommend to anyone. I also recommend patience, because whenever the crazy fanatics appear, I had to take a few short breaks, by tilting my head back, stare at the ceiling and just breathe in and out, so I wouldn't bang my kindle into a hard surface. And Flame's past... Patience, because it has the best of the happy endings.

I didn't really plan on reading the next book but I'll be crazy not to. Let's just say, it's high time for some to pay their dues.

I think it's pretty obvious it's a 5-star book for me. I also want to thank the author for the copy given in exchange for an honest review.