Release Blitz I Got You by Jamie Lake & Jeff Rivera 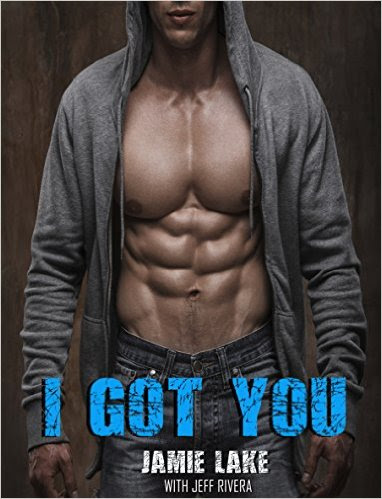 When college student Jake is left for dead on the side of the road, he has one thing on his mind: Learn to defend himself against the men that gay bashed him.

And fight back or die trying.

Aspiring MMA trainer Benjamin is on his last leg, literally. As a wounded warrior, he's scarred from a broken heart that has nearly broken his spirit.

So when Jake approaches him for lessons and tells him his story, it touches his heart.

The more time Jake and Benjamin spend together, the more they realize they’re becoming best friends.

The more time they spend together, the more they realize they can't live without each other.

The more time they spend together, the more they realize they’re falling in love.

But Jake has a secret, one that could change everything....

“No. People might see us,” Jake said. He looked down and saw a handful of people down quite a distance away. His insecurities about himself surfaced.

He couldn’t help myself.

“Look at me,” Benjamin ordered and stood up. “Now.”

“I don’t like it when you say no. I’m a man. And I’m used to getting my way. If we’re going to be together, you’re going to have to get used that. And right here, right now, I want you. I’m going to take you, Jake. You hear me?”

Somehow those words comforted him, soothed him, gave him the security he needed.  They also gave him a hard‐on so stiff, it hurt. “I got you. They can’t see us through the trees. Besides, that’s what makes it hotter.”

“We should just ...” Jake said, but Benjamin’s kisses down his neck stopped him.

“Huh?” Benjamin asked, continuing to kiss him in all the right places.

“We should ...” But again, the man’s hot mouth tasted the nape of Jake’s neck, his hot breath rolling down his arm. Every kiss, every touch was heaven.

“Huh?” Benjamin teased, that devilish smile of his indicating he had no intention of stopping.

Benjamin’s kisses ended at Jake’s fingertips where he slid them in his hot wet mouth, toying with them with his tongue. The vibration of his moan as he slid them in and out, in and out of his mouth made Jake arch his neck back in ecstasy.

“Are you sure you want to stop?” Benjamin asked. “Huh?”

“Are you sure you want me to ... stop?” He ran his tongue up and down the underside of his wrist. Jake had no idea that was one of his spots. Leave it to the love‐making machine to help him discover it.

True love exists and if I can inspire people to know that, then I've done my job. My stories take place in the towns I lived in while searching for my purpose: Oregon, Nevada, New England, the South and the heartland of America. They are dedicated to the angels I met along the way who showed me true love comes in all forms, unconditionally. It wasn't that long ago that I was living in my car with my mother and pets. But whether it was being abused as a child, bullied at school or taking care of my family's illnesses, one thing kept me going: my writing. I knew if I kept writing from the heart, people would connect and one day my dream of being an author would come true.  ~~~

Jeff Rivera is an author and inspirational media personality. He has appeared on national television, radio and print in such outlets as Forbes.com, The Boston Globe, Publishers Weekly, Right On! Magazine, Rotarian Magazine, TMZ, WABC, WNBC, WCBS, SITV, American Latino and NPR. He also writes or has written for Entertainment Weekly, Mediabistro, GalleyCat, Publishing Perspectives, Digital Book World, Examiner, American Chronicle, School Library Journal and the Huffington Post and has been invited to speak and inspire groups all over the world from South Carolina to Nigeria. He has been on panel discussions for The Library Journal, Authors Guild, the Harlem Book Fair and many others.

My name is Jamie Lake and I'm the author of more than 50 gay romance novels and novellas. I've been a big fan of gay romance books ever since I started reading them and I really try to do something a little different. Some of my favorite gay romance mm authors are Kindle Alexander, Sara York, Riley Hart and River Jaymes.

With my own novels, I like to give my readers all the hot steamy scenes they like, but I also write characters with a lot of drama.