BOOK TOUR - THE FALL UP BY ALY MARTINEZ

I wanted to jump.
He made me fall.

As a celebrity, I lived in the public eye, but somewhere along the way, I’d lost myself in the spotlight.

Until he found me.

Sam Rivers was a gorgeous, tattooed stranger who saved my life with nothing more than a simple conversation.

But we were both standing on that bridge for a reason the night we met. The secrets of our pasts brought us together—and then tore us apart.

Could we find a reason to hold on as life constantly pulled us down?

Or maybe there’s only one direction to go when two people fall in love at rock bottom—up. 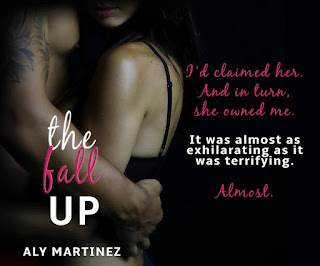 EXCERPT
“You’re overdoing it, Lev. I know this job isn’t exactly nine-to-five, but it’s not twenty-four-seven, either. You have to stop being Levee Williams all the time and just be you.”
“I know,” I responded.
I didn’t though. I felt like a robot parading around in a lost woman’s body.
Smile.
Pose.
Turn.
Toss in the occasional song.
Repeat.
What little time I did manage to carve out for myself was spent at various children’s hospitals across the country.
Smile.
Pose.
Turn.
Watch a child die.
Repeat.
With every day that passed, the smile became less and less genuine, the pose more and more forced, and the turn took me further and further away from who I really was.
My career was soaring while, personally, I was plummeting. Every single day felt like a terrifying free fall in no particular direction. I was stuck in the middle with no way up—or down.
“You remember that girl, right?” Henry asked, tucking a hair behind my ear.
I nodded.
I did remember her. She was fun and carefree. She loved going out and dancing at nightclubs until the very last song played. She slept until noon if she could. Then, fueled by coffee alone, she’d spend the day with a guitar strapped around her neck and a notepad at her side. She had a huge heart, but she knew her limitations.
Oh, I remembered that girl. I just couldn’t figure out how to get back to her. 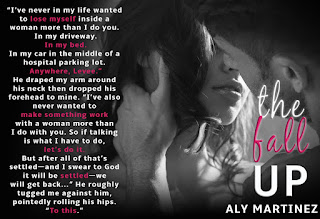 The Fall Up is a sweet and touching story about “Pop Princess” Levee ready to end it all, and her “Pauper” Sam the swoony heartbroken man that saves her. After meeting one night on a bridge they form a connection and give each other salvation.

One of the best things about Aly Martinez’s books is the banter. I can’t even tell you how much I love the conversations her characters have and the LOL moments they provide. A BIG highlight for this book was Levee’s best friend Henry. He had me cracking up big time.

For the most part I liked the journey that Levee and Sam took to heal and get what they want. I would have liked a little more reveal on Levee’s issues earlier in the story. I felt it came so late I had a hard time connecting with her. I think I was too focused on trying to figure out why she was so sad that I lost something in the story. I did really like Levee though and she made me laugh just as much as Sam did. Sam was such a fantastic guy and you can’t help but fall for him. He made me laugh and swoon throughout the whole book. He really got me towards the end with the things he gave Levee. I know some readers might find it cheesy but it worked for me.

If you are looking for a book to give you some laughs, sigh, and is lower on the angst this is a great choice. Well done!

Levee and Sam meet atop a bridge one evening, and although we think we know why they're there, we really don't. Levee is trying to escape the pressures of her celebrity lifestyle; Sam is awash in regret over his sister's death. There is an instant attraction and also a protectiveness for each other, which was quite endearing.

I think my favorite parts of the book were Levee's interactions to with Morgan, who has a surprising tie to Sam. And Sam's "storybook" of how they met was absolutely priceless. The book was quite an enjoyable read, but other than Sam's book for Levee, there wasn't much that was memorable to me, but I'd still recommend giving it a go if you're looking for a easier romantic read without too much drama.

About the Author:
Aly Martinez