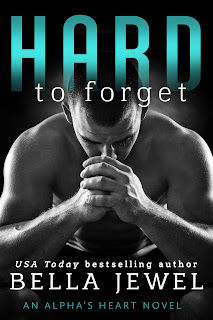 HARD TO FORGET
An Alpha’s Heart Novel, #3
By Bella Jewel
St. Martin’s Paperbacks
On Sale: December 15, 2015
eBook only
$3.99 USD
Goodreads
Buy Links
Amazon: http://www.amazon.com/dp/B00WRFUEJI/ref=cm_sw_su_dp
iBooks: https://itunes.apple.com/us/book/hard-to-forget/id990319945?mt=11
B&N: http://www.barnesandnoble.com/w/hard-to-forget-bella-jewel/1121815834?ean=9781466891371
Kobo: https://store.kobobooks.com/en-us/ebook/hard-to-forget-4
About The Book
The third book in the sexy Alpha's Heart series by USA Today bestseller Bella Jewel.
Delaney, a professional bodyguard, has spent years trying to prove herself in a male dominated industry.  Now she's facing her greatest challenge yet.
Bad boy billionaire Jax Shields has made plenty of enemies on his climb to the top, but being in the wrong place at the wrong time has put his life at risk. Now he's putting his life in the hands of Delaney and her team. He demands the best in everything, and he doesn't think she has what it takes to protect him. He's also made it clear he'd rather have her on her back then covering his. Will Delaney be able to prove herself to the most arrogant-and devastatingly handsome-man she's ever met? 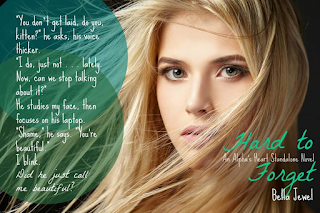 GUEST REVIEWER - ANGIE'S 4 STAR REVIEW
Well I liked this book the best in the Alpha's Heart series. Delaney is a bodyguard. Her training has been a hundred times harder than it is for men. She has to do more to prove herself plus she has to deal with endless teasing and prejudice.

She's finally given a top client, Jaxon Shields. Jax is a wealthy hotelier who was in the wrong place at the wrong time and he needs protection until an arrest is made. Jax has made it clear that he's uncomfortable with a woman guarding him but he has little choice.

Delaney and Jax have an attraction but at first Delaney didn't let it affect her job. In fact, she was kicking ass. But after they give in to their feelings Delaney became distracted and jealous to the point that she'd compromise Jax's safety by running off. And then she'd ignore his calls forcing Jax to put himself at risk to come find her.

But that's the only thing that irritated me. Otherwise, Hard to Forget was very well done. An enjoyable read. 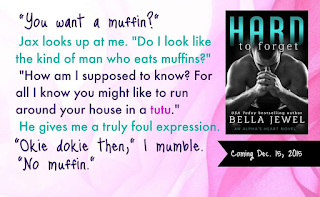 Posted by The Dirty Book Girls at Tuesday, December 15, 2015