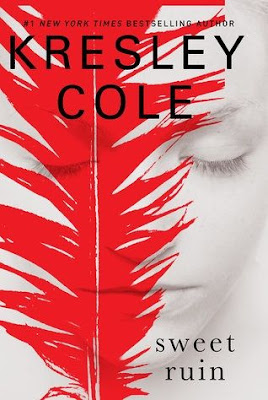 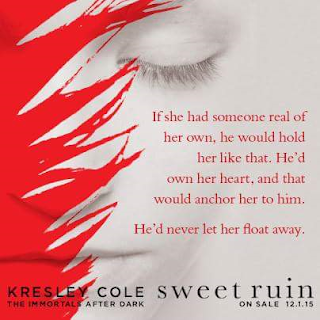 SYNOPSIS
An immortal assassin is caught between desire and duty...

A foundling raised in a world of humans

Growing up, orphaned Josephine didn’t know who or what she was—just that she was “bad,” an outcast with strange powers. Her baby brother Thaddeus was as perfect as she was flawed; protecting him became her entire life. The day he was taken away began Jo’s transition from angry girl... to would-be superhero... to enchanting, ruthless villain.

A lethally sensual enforcer on a mission

A threat to the Møriør has brought archer Rune the Baneblood to the mortal realm to slay the oldest living Valkyrie. Whether by bow or in bed, he never fails to eliminate his target. Yet before he can strike, he encounters a vampiric creature whose beauty conceals a black heart. With one bite, she pierces him with aching pleasure, taking his forbidden blood - and jeopardizing the secrets of his brethren.

A boundless passion that will lead to sweet ruin...

Could this exquisite female be a spy sent by the very Valkyrie he hunts? Rune knows he must not trust Josephine, yet he’s unable to turn her away. Despite his millennia of sexual conquests, he can’t ignore the unfamiliar longing she arouses deep within him. When Jo betrays the identity of the one man she will die to protect, she and Rune become locked in a treacherous battle of wills that pits ultimate loyalty against unbridled lust. 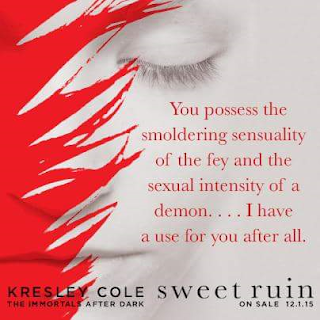 SHANDA'S 5 STAR REVIEW
Wow, you would think with this being book 15 in a series that it would be stale and boring. IT WASN’T!! One thing I don’t love about authors in traditional publishing is they start popping out formulatic stories for a high price. Kudos to Ms. Cole for keeping it fresh, Sweet Ruin was amazing.

Jo is the older sister of Thad (cowboy Phanpire) whom we have met in the previous books. The story begins with 11 year old Jo caring for baby Thad the best she can. They are homeless and Jo turns to thieving to provide for her and Thad. Jo and Thad are eventually separated; Thad is taken in by a sweet couple and is given a good life. Jo is left wandering alone but she watches Thad grow up from afar.

Our hero in this story is Rune the Baneblood (half demon/half dark fey) who loves to bed Nymphs to get information. Rune is also a Morior archer, his current assignment is to take out Nix. Rune’s blood is highly toxic to everyone except the lovely Jo who can’t get enough of it.

Jo realizing she is Rune’s mate and going for it instead of fighting it was refreshing. After a very lonely existence she is actually thrilled by this and tries to use any trick she can (this resulted in some hot and heavy scenes) to get Rune to give her the one thing she demands, Monogamy! Of course Rune is appalled by this prospect and fights her all the way.

This book was packed with fabulous stuff. Jo’s background was unique but also provided some interesting things for the future of the IaD world. I freaking love Nix she makes me laugh so hard and I think her story is going to be AMAZING. Which side will Rune choose in the end? How will Jo and Rune play into Nix’s plans? Will Nix achieve Goddesshood? I think she will achieve it and I think it is going to be EPIC! I can’t wait for more!!
AMY'S 5 STAR REVIEW
Sweet Ruin is a fantastic addition to the IAD world. We learn fairly quickly that Josephine (Jo) is Thad's long lost sister. We learn of the things she endured to try to protect Thad, although we don't get the full story behind Jo and Thad until fairly late into the book.

Rune is a Morior (aka the Bringers of Doom). I actually liked the Morior faction...and I think there is a lot to be explored in their realm. He's come from his home dimension to Earth, specifically to destroy Nucking Futs Nix....and she definitely earns her name with her actions in this book.

Jo and Rune are an interesting pairing. After learning what "mate" means, Jo has absolutely no doubt that Rune is hers. Rune is harder to convince, as he's always lived his life wild and free, doing what he thought he was needed to do as the Morior's Secrets Master. He almost ruins everything with Jo, but he figures out what needs to be done....and he gives her time to be angry with him.

There are so many strings left after this book that I have no clue when (or if) this series will ever end; but I'm okay with that, as long as the stories continue to be written as well as this one.

Kresley Cole is the #1 New York Times bestselling author of the electrifying Immortals After Dark paranormal series, the young adult Arcana Chronicles series, the erotic Gamemakers series, and five award-winning historical romances.
A master’s grad and former athlete, she has traveled over much of the world and draws from those experiences to create her memorable characters and settings.
Her IAD books have been translated into twenty foreign languages, garnered three RITA awards, a Hall of Fame induction, and consistently appear on the bestseller lists, in the U.S. and abroad.
Cole lives in Florida with her family and “far too many animals.”