Review Wait for It by Mariana Zapata 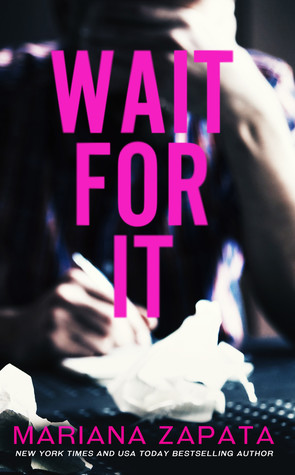 If anyone ever said being an adult was easy, they hadn't been one long enough.

Diana Casillas can admit it: she doesn't know what the hell she's doing half the time. How she's made it through the last two years of her life without killing anyone is nothing short of a miracle. Being a grown-up wasn’t supposed to be so hard.

With a new house, two little boys she inherited the most painful possible way, a giant dog, a job she usually loves, more than enough family, and friends, she has almost everything she could ever ask for.

Except for a boyfriend.

But who needs either one of those?

I've been with MZ since Under Locke was published. To this day, that's my all-time fave MZ book.

There are a lot of people out there that love their romance to be slow burn. I don't mind them. I'm not really into insta-love - the whole falling-in-love-after-a-few-pages-you're-mine thing is not my cup of tea. I can't say slow burn is my fave either, so maybe something in between.

Anyway, I loved the characters from this book. Diana is awesome. She's down-right awesome. And my fave after Iris. Louie and Josh, Diana's nephews were the bomb of the story. They were either making me laugh or cry. They were perfect side characters.

Dallas... At first, I didn't really have an opinion about him. I didn't like him or dislike him. But as we oh-so-very-slowly got to know him, I started to like him. He was something else. Their friendship grew into a connection then love.

I loved the cameo Dex made. Lord have mercy, I swooned! Kulti was there too, the sexy bratwurst.

I actually really liked the plot. So why the 4 stars, you ask? Well, It was a bit too slow burn for me. I, for one, truly believe that MZ didn't have to add that one and only sex scene at 95%. Why? It either should have happened sooner or not at all. I skipped through it because I didn't see the point of it. But that's just me and my two cents.

I'm looking forward to what else MZ has up her sleeve and I hope her next one will dethrone Under Locke for me. Who knows, maybe one day.