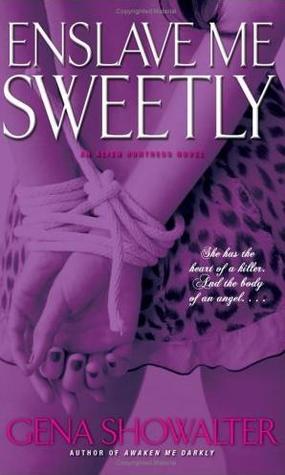 Eden Black walks among humans, protecting them from the murderous evil of other-worlders who abduct and enslave. And though she appears to be human herself, Eden is an alien, a Raka, distinguished by her golden hair and skin, and gifted with the ominous ability to kill without remorse -- and with total accuracy. That is, until the fateful night she has one shot to eliminate her target, a human slaver -- and misses.

It was a good one.

The enemies-to-lovers theme is strong with these too, haha! The hero is a total jerk, at the beginning, but the heroine isn't a damsel in distress either. Yay!

In a world where aliens are living on our planet, many things can go wrong. And that's why someone has to make sure to punish the bad guys.

Enter Eden Black, who's out to get a notorious alien that auctions off humans and aliens as slaves, to the highest bidder.

Enter Lucius - oh boy, newest partner to Eden after Eden sort of messed up. Not really her fault, if you ask me.

The back-and-forth between these two was well-done, some may say it was insta-love but really, that is something I accept in PNR. Seems more plausible there.

But all of that aside, I loved how they finally decided to work together and the ending was good. Yummy Lucius!

Gena Showalter can sure write 'em!