Tour Stop + Reviews + Giveaway Nothing Special V by A.E. Via 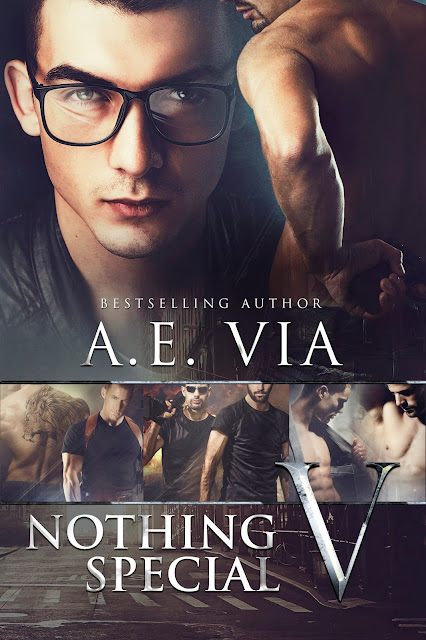 Atlanta's notorious narcotics task force is at it again. They are stronger, bigger, and better than ever. Especially when a city councilman sends RECON Marine, Edwin Steele - who’s been blacklisted from his Oakland department - to join the team. God and Day weren't recruiting. They have a lot on their plates, like the fact they're supposed to be getting married soon. They don't have the time or the patience to integrate a decorated war hero with a slight chip on his shoulder into their well-oiled machine.

A hothead that's uncontrollable and terrible with authority… but wasn’t that their team motto?

Steele was ready to hang up his shield. He was done fighting with bigoted bastards that couldn't respect the job. He was good at fighting; he just needed the right team to fight with. When his uncle - City Councilman, Rasmus Steele - shows him a video of God's team in action, he knows right away, it's where his nephew belongs in order to restore his faith.

Steele was skeptical about his new placement, but when he meets God's technology specialist/computer genius, “Tech,” he's willing to give it his all, and he definitely shows and proves.

Tech is stunning. His sweater vest and khakis, a stark contrast to the blue-jeaned roughnecks he works with. A beautiful sheep amongst the wolves. Steel thinks there's no way the brilliant man would be interested in a hardhead like him, but Tech has a few badass hidden talents of his own and manages to fool him... fool all of them.

This story is a part of a series but can stand alone. It does not end on a cliffhanger and has a HEA. There are no multiple pairings in this novel. 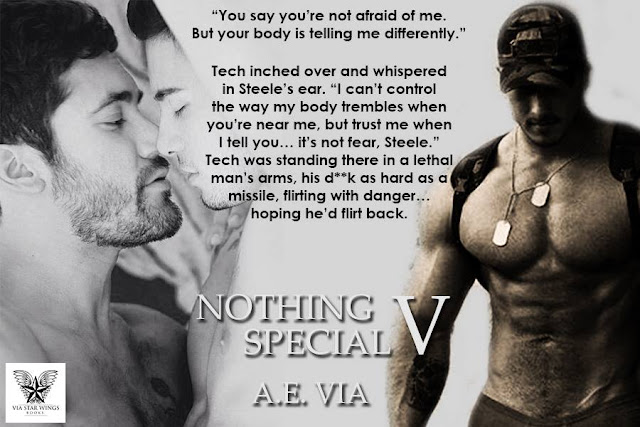 I was so excited that AE dropped this book early. I have been without them in what feels like FOREVER. I almost forgot how hilarious and special Day is. He really is the light in this series and will forever hold a special place in my heart. I have been with this series from day 1, literally, and I have been just so ecstatic to see it grow and the characters develop and change and grow. They’ve come so far in the two years + that they were introduced.

The stories only get hotter and more action packed and the characters more interesting and intricate. This story in particular is mainly about God and Day and Tech and Steele ((I love then nicknames she comes up with)). It rotates chapters between characters so we see the story in multiple points of view. The only “issue” I had with this was, I was half way though the book, and I could have sworn I was further along than that. It made it seem longer, not that it was boring or anything, just a lot going on (in a good way) and still so much more needs to happen.
That being said, that beginning?? I think I shed a few happy tears. Then in the middle I really started getting worried. God made me so, so nervous!!! And Tech?? He was such a nice surprise. I love him dearly and I want to keep him and hold him to my bosom forever and ever. He’s smart, sexy, and strong. He’s like the trifecta of awesome. I have a thing for nerds and silver foxes and AE ticked off all my boxes in this story. Steele also was a nice surprise. I loved that she wrote a character that could go head to head with God, but didn’t actually challenge him, because he respected his leadership. Even though they were pretty evenly matched.

The care Steele took of Tech and didn’t get overly stupid jealous with him and his overall maturity ((after the first incident)) was refreshing. The fact he didn’t want a “friends with bennies” situation, but an actual grown up relationship speaks volumes about him, again, a breath of fresh air! The action packed drama sequence was pretty hilarious too. I adore Ruxs and Greene and their general badassery. They did NOT disappoint!!

After I started reading this though, I *thought* there was going to be some Gen and Curtis. Have no fear y’all! There are some bonus chapters and they are SOOO worth it. I would seriously LOVE a straight up Gen book. I think he is such an awesome character and the way he loves Curtis is just do.damn.sweet!!!

I love these guys, they're very near and dear to me and I was so excited to read this book! More God & Day? Yes, please!

But. While there were some feels and a little drama, I didn't figure out what the actual plot was. Was it Steele and Tech getting together? Was it the issues that God and Day had that needed to be solved? Then there's the Preston thing thrown in... why?

It was a miss for me. I hate that but you can't love them all, I guess. But am I very excited about what comes next, just hope other things won't overshadow the actual plot. All in all, okay and some things I did love.

I voluntarily reviewed an ARC copy of this book. My rating is 3 - 3.5 stars.

A.E. Via is an author in the beautiful gay romance genre and also founder and owner of Via Star Wings Books. Her writing embodies everything from hopelessly romantic to spicy to scandalous. Her stories often include intriguing edges and twists that take readers to new, thought-provoking depths.

When she's not clicking away at her laptop, she devotes herself to her family--a husband and four children.

Adrienne Via has tons of more stories to tell, but she really would like to hear yours. Via Star Wings Books is currently accepting submissions for established and aspiring LGBTQ authors. I've contracted and successfully published a couple authors - whose information can be found on my website - who can tell you that my passion is giving other writer's stories the love and care it deserves so it could be a gift to another. Visit my site to learn more!

a Rafflecopter giveaway
Posted by The Dirty Book Girls at Sunday, December 25, 2016