Zeke Reed lives his life by his rules, the biggest one being that he refuses to settle down. Through the years, it has become a running joke amongst his circle of friends that his condo would be well served by the installation of a revolving door.
That’s what makes his friendship with Mary and Jeff work. All three of them are looking for some no-strings-attached fun. Until fate steps in, making them all take a look at what’s been developing while they’ve been busy fooling around.
Unfortunately, every decision in life has consequences. When you choose to openly share your life with more than one person, things get complicated. Will Zeke, Jeff and Mary be able to stand together as the world tries to pull them apart?

Teaser:
Jeff:
I run my fingers down the length of her arm, silently vowing to do whatever I can to make sure nothing like this happens again. I’m not talking about the accident. As much as I will go out of my way to protect her, I know things happen in life and it’s impossible to plan for every scenario. I’m not foolish enough to think that I’m in love with her, but there’s definitely something deeper than friendship between us. Between all of us. And we need to make sure we’re on the same page in the future.
“I’ll be back as soon as I can,” I whisper into her ear. “Zeke’s going to stay with you. If you wake up and need anything, tell him.” She may not consciously hear me, but I hope my words register with her on some level. I brush the hair away from her forehead, resting my lips there for a moment before turning to leave.
Zeke falls in line behind me as I move toward the door, his fingers laced with mine. “Hurry back,” he says, tilting his head up to kiss me. I lean against the door, effectively barring anyone from entering.


I tug at his t-shirt so I can run my hands along the firm ridges of his abs. Zeke moans when I flick his nipple ring. If we had more time and I had more energy, I’d do the same with my tongue, freeing my hands for further exploration, preferably inside his jeans. There are so many other things I need to be focused on, but Zeke is the one person capable of giving me the physical release that will serve as a reminder to not get carried away with my own thoughts. 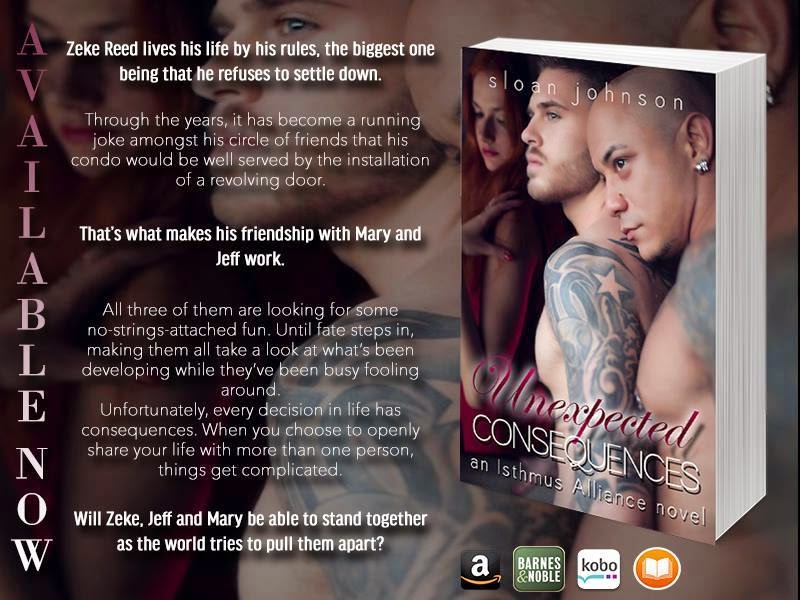 The actual theme of Unexpected Consequences, in my opinion, is acceptance, being true to oneself and adult child/parent relationships.

Characters from the previous books do make appearances in this one, but it is mostly about the three main characters.  Zeke is co-owner of a thriving music industry business.  Jeff is a psychiatrist.  Mary is a lawyer.  All are successful.  And all figure out they want something different than the traditional relationship.

This story picks up where book 2 ended, actually back tracking just a little to a few minutes before the final scene.  We see it from a different perspective.  Since this book is mostly about the trinogamous relationship, we still have some mystery behind the Nick Romero drama that has been unfolding between the 3 books.  We still aren't completely to the bottom of this story.

After the accident at the end of book 2, beginning of book 3, Mary is injured.  Jeff and Mary move into Zeke's apartment, the place they always hooked up, so that Zeke and Jeff can take care of Mary.  Being constantly together leads to more deeper feelings which leads to having to face each other's pasts, presents, futures, families and friends.

"You're a lucky man, doctor.  Seems to me you hit the jackpot a couple times over.  Now you'd just better hope it doesn't all explode in your face."

Yet another reason I don't do relationships.  Apparently, getting involved in one means emasculating myself and putting my balls up on a shelf.  Being with two people, I'm not really sure at this point which one of them I'll have to ask for permission to have them back.

They seem to be doing a fine job creating Jerry Springer style memories all on their own.

Although, a difficult road, the love they have is classically beautiful. 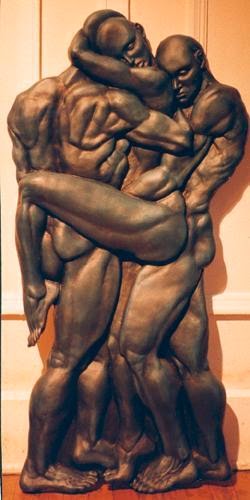 I enjoyed all the books in this series, but I especially liked the Zeke and Jeff scenes in this one.  Also I'm looking forward to Liam's book.

***ARC was given by author for an honest review***

Sloan Johnson is a big city girl trapped in a country girl’s body. While she longs for the hustle and bustle of New York City or Las Vegas, she hasn’t yet figured out how to sit on the deck with her morning coffee, watching the deer and wild turkeys in the fields while surrounded by concrete and glass. When she was three, her parents received their first call from the principal asking them to pick her up from school. Apparently, if you aren’t enrolled, you can’t attend classes, even in Kindergarten. The next week, she was in preschool and started plotting her first story soon after. Later in life, her parents needed to do something to help their socially awkward, uncoordinated child come out of her shell and figured there was no better place than a bar on Wednesday nights. It’s a good thing they did because this is where she found her love of reading and writing. Who needs socialization when you can sit alone in your bedroom with a good book?

Now, Sloan is a tattooed, purple haired mom of two kids, one of which was a thank you present to her husband for letting her get a Staffordshire Terrier with more anxiety issues than Sloan has, which is saying something. She’s been kicked out of the PTA in two school districts and is no longer asked to help with fundraisers because she’s been known to lose herself in a good book and forget that she has somewhere to be.
Website | Facebook | Twitter | Goodreads | Isthmus Alliance FB Group
Hosted by: