We just want to mention before y'all go into the cover, that we sisters got to beta read this book for this awesomely sweet author. This book is HOT HOT HOT and you will NOT be disappointed! We feel it is her best work to date and are glad we get to be a part of it!

So congratulations A.E. Via and good luck ;) 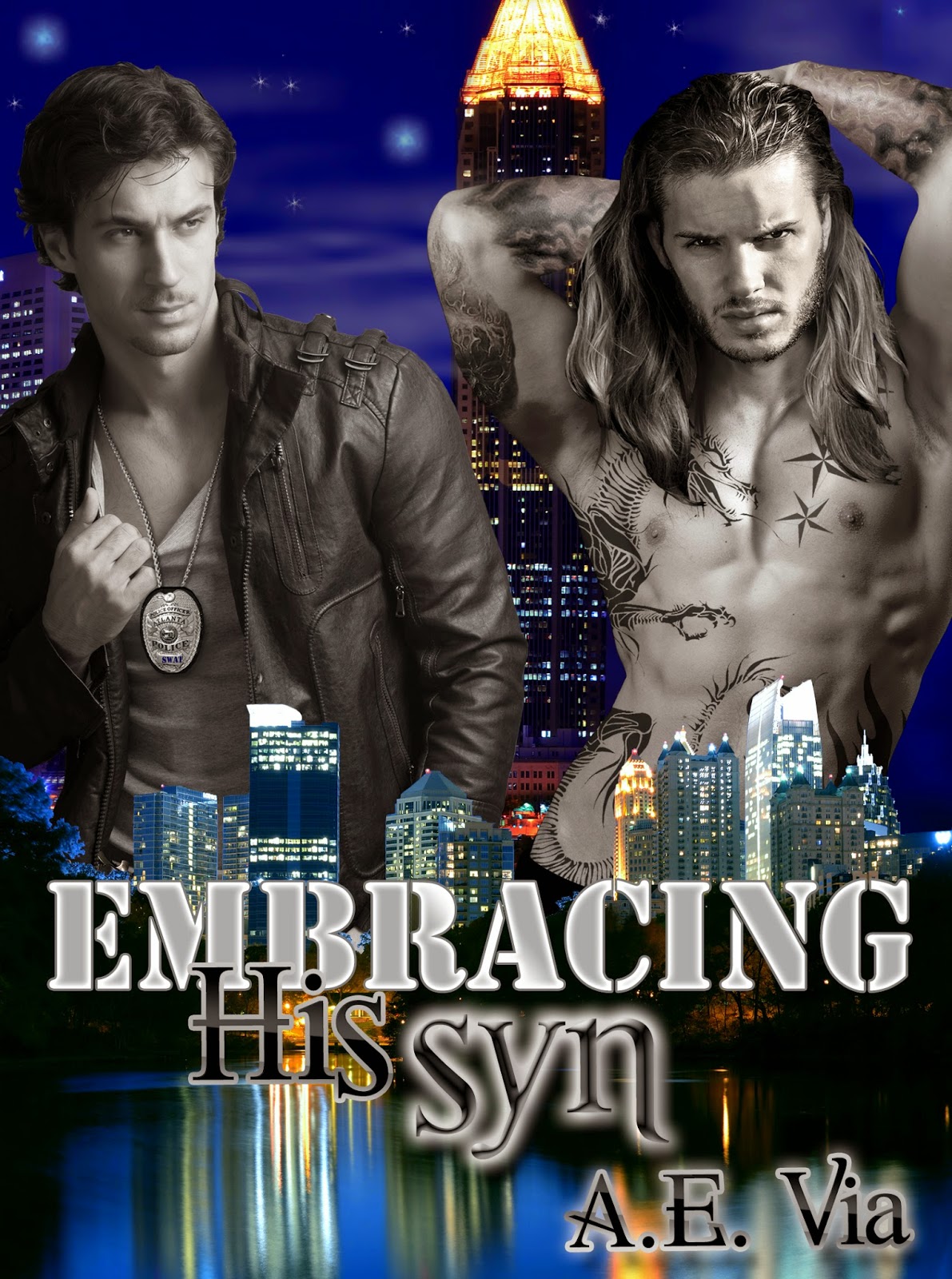 Wow! I can’t express how excited I am to introduce my two hottest new characters: Sergeant Corbin ‘Syn’ Sydney and Furious ‘Furi’ Barkley from my new gay erotic romance, Embracing His Syn. This is not technically a sequel to Nothing Special, therefore you do not have to have read it prior to Syn’s story, but some of the main characters that you loved from that novel are running rapid through this one. So to all my God, Day, Ro, and Johnson fans that have been feigning for more of those sexy characters … they show up in Syn’s story as great supporting characters.
I hope you all enjoy the story of these very intense alphas. It’s filled with entertaining humor, fast police action, unexpected twist, and lots of hot man on man sex!
Make sure you one-click it on July 30th!

I’d like to extend a very special thank you to my betas for all their wonderful comments and advice. Especially River Mitchel for letting me pick her brain half to death and to Kristen Karwan for the late night chats about where to take Syn and Furi and of course her awesome graphics that she’s designing for the promotions. I appreciate everyone that supported me and helped to bring Syn and Furi to all the MM readers.

Loves,
Adrienne
Author A.E. Via
"Only Thing Sexier than One Man, Is Two of Them Together"

Synopsis
Sergeant Corbin 'Syn' Sydney transferred from the Philadelphia Police Department as soon as he'd heard there was going to be an opening on Lieutenant Cashel Godfrey and Lieutenant Leonidis Day's Atlanta Narcotics Task Force. Syn’s primary goal in his life has been to be a great cop. There has been no time for relationships, romance, or especially love.

Syn was dedicated to his new force, focused and ready to back up God and Day as their third in command, but what he wasn't ready for was the feelings he got from seeing the love they had for each other.

Syn's all prepared to accept his lonely fate until he walks into a small pub and meets long-haired,
tattooed, bartender, Furious Barkley. Before he can even understand why, Syn's feeling things he barely recognizes: passion, yearning, cravings; and if the dark, lustful gazes are anything to go by, Furious might be feeling the same things for him.

Just one thing needs to happen before Furi and Syn can give each other what’s been missing from their lives for so long...
Syn needs to allow happiness into his world and Furi needs to learn to open his heart and trust again.

God, Day, Ronowski, and Johnson are still as entertaining as ever...

Disclaimer: This book DOES NOT contain polygamous sexual pairings.
Links:

“I was exactly the man for this job Captain Myers, but I refuse to work for these two thieves.”
God moved into Syn’s personal space quickly, damn near putting his nose on Syn’s forehead. He snarled, "Shut up," but Syn didn’t budge. He kept talking, refusing to be intimidated.
“The bust went exactly according to their plan. You might want to check some of your detectives' bank accounts, Captain. It seems they aren’t satisfied with their pay grade and have resorted to robbing dealers.”
“Are you referring to yourself, Sydney?” God pfftd.
Syn saw red. His hand moved quickly, too fast for God to stop it as he bunched God’s jacket up in his fists. Syn didn’t anticipate God’s anger escalating as quickly as it did. A huge hand locked on to his throat, the other massive hand gripping his bulletproof vest. God propelled him backwards until Syn slammed against the wall.
“Calm down, Sydney!” God roared.
Syn tried to unsuccessfully take a breath.
“God, back off, now!” Syn could hear the Captain yelling, but his head was pounding from the impact with the wall.
Syn knew he only had a few more seconds before he would pass out. He brought his right arm all the way up and slammed it back down onto God’s forearm, dislodging the punishing grip. Syn gulped a quick breath, crouched low and slammed his right fist into God’s ribs. He saw God’s right fist coming and he had to use both arms to block the hit. Fuck, God was strong and fucking huge. God grabbed both of Syn’s shoulders and no matter how Syn twisted, he couldn’t pry himself free. He stopped trying to remove God’s fingers and instead braced both hands on God’s thick shoulders, reared his head back and slammed his forehead into the bridge of God’s nose, finally making him release his grip. God staggered back and although Syn was dazed, he moved in, determined to keep the upper hand. In a split second he registered his legs being taken out from under him. Day had moved like a panther, dropped and spin-kicked his legs, sending Syn to the floor back first, hard.
Damn that fucker is fast. Syn didn’t let the pain radiating down his back stall him. He kicked back up onto his feet and prepared to take them both on. How? He had no idea, but he damn sure was going to give it his best try.
“Enough,” Day said easily, not even out of breath.
Syn saw God over against the Captain’s desk moving his nose back and forth checking to see if it was broken. Syn didn’t dare let his guard down. “I’ll say when it’s enough and I won’t stop until I’ve gone to IA and your whole goddamn task force is under investigation. It won’t be enough until they’re probing up your asses with microscopes for dirty money,” Syn gasped the words between breaths.
“A microscope is not what I prefer up my ass Detective Sydney … or haven’t you heard?” Day retorted.
Syn couldn’t stop his startled reaction, Day’s crass remark catching him off guard. “You sonofabitch.” Syn moved toward Day again, his resolve long gone.
Captain Myers moved in and put a thick hand against the front of Syn’s chest. “Actually, I say when it’s enough. Detective Sydney, unless you want to wait down in lockup until you calm down, I suggest you get a hold of yourself. You are all highly trained professionals and you’re acting like goddamn animals.”
Syn’s chest heaved up and down with adrenaline. He’d just taken on God and Day. What the hell am I doing?
Captain Myers turned and pointed a long finger at Day. “Day, if you ever refer to anything you want in your ass around me again, I’ll have your inappropriate, cocky ass back in a uniform policing school zone traffic.”
Syn heard Day snort at the Captain and walk over to God, squinting to look at his nose. “Is it broken?” Day asked.
God shook his head no, while glaring at Syn.
Day smiled at Syn with what looked like pride. He clapped his hands together once and whooped before speaking. “Damn, the man can rumble. Never seen anyone not back down from you, God. I like him already. I say we make him third in command. I told you he’d fit right in. Man, when I’m right, I’m right. Sometimes I stun my damn self with how great a judge of character I am!” Day did some weird happy dance.
“Yeah, I’m a great judge of character too, that’s why I don’t like anyone,” God snapped.

AUTHOR BIO:
A.E. Via is still a fairly new best-selling author in the beautiful gay erotic genre. Her writing embodies everything from spicy to scandalous. Her stories often include intriguing edges and twists that take readers to new, thought-provoking depths.
When she’s not clicking away at her laptop, A.E. runs a very successful paralegal-for-hire business, and in her spare time, she devotes herself to her family—a husband and four children, her two pets, a Maltese dog and her white Siamese cat, ELynn, named after the late, great gay romance author E. Lynn Harris.
While this is only her fourth novel, she has plenty more to come. So sit back and grab a cool drink, because the male on male action is just heating up!
Go to A.E. Via’s official website http://authoraevia.com for more detailed information on how to contact her, follow her, or a sneak peak on upcoming work, free reads, and where she’ll appear next. 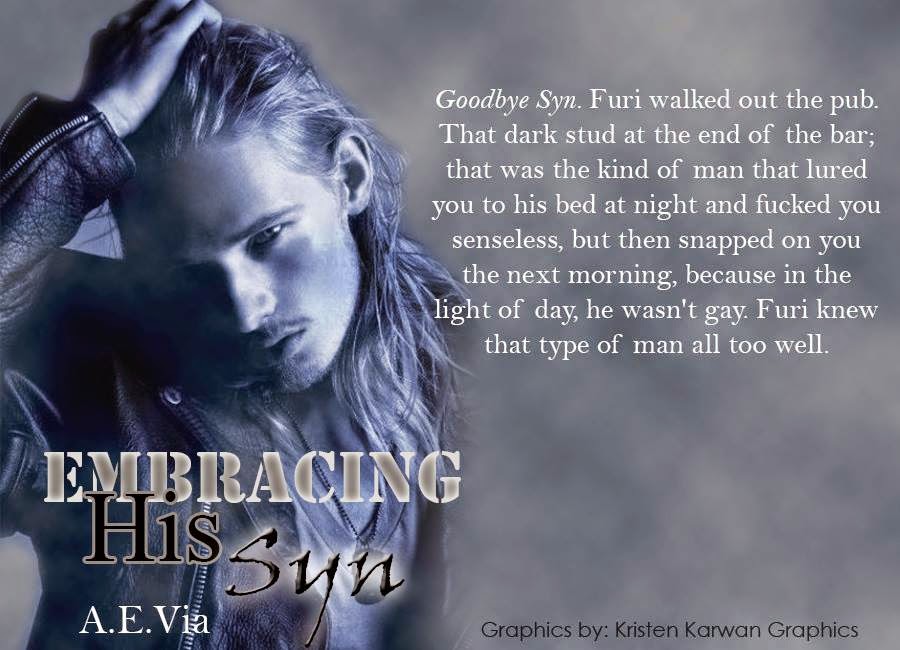 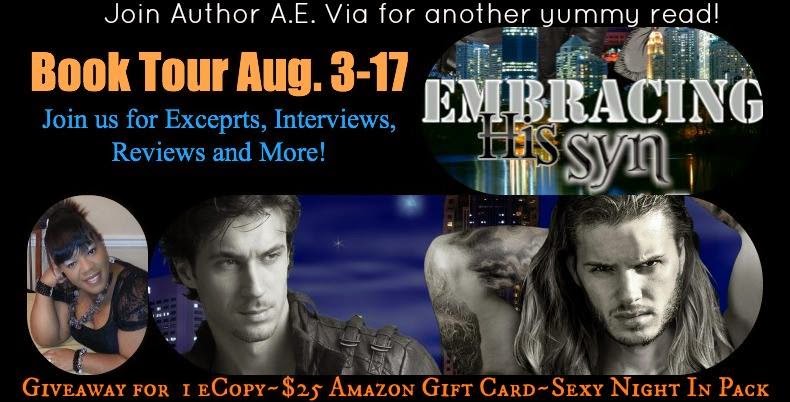