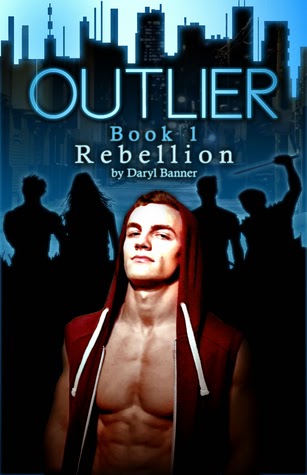 “Those in power will do whatever they can to get away with everything they can.”Every citizen in Atlas, the last city on earth, is born with a unique, special ability, and no one sleeps past the age of two.Except for Wick Lesser who, at seventeen, still sleeps. Hiding this rare ability from the world, his father, who can calculate futures, trains him in self-defense and combat while his healing-gifted mother works an unglamorous job in the muds and keeps his secret safe with the help of Wick’s older brothers. The Lesser family of the ninth ward slums manage to keep afloat, suffering under the corrupt, greed-driven Kingship of the Lifted City.But not for long.In the first installment of the Outlier series, Wick’s unassuming slumborn life soon explodes into a full-speed adventure of danger, betrayal, and self-discovery when he secretly joins an underground rebel movement working to take down the oppressive ruling power. But the task is far from easy, and there are more adversaries than Wick can count. Not to mention the complication of an intense, unplanned attraction ... to someone on the wrong side of the rebellion.Powerful forces are gathering to put an end to the uprising, including the city’s elite crew of law-enforcers called Guardian, of which Wick’s own two eldest brothers are sworn members, and all corners of the slums grow ever restless: a lustful boy with blackened eyes leads a violent street gang, with Wick’s younger brother as his newest recruit. A cunning orphaned girl whose ability is to be unseen, sees everything. And high up in the Lifted City, a privileged and wealthy boy yearns for an exciting new life in the slums.The world is at a precipice of great change. No one is safe. The rebellion has begun.*** Contains adult themes, M/F and M/M sexuality, and violence.

Daryl Banner is a writer and composer who graduated from the University of Houston with a degree in Theatre and Psychology. After writing several plays and a musical in college, he started composing for short films and websites, one of which is the Vamplets "Baby Vampyre Dolls" website: (www.vamplets.com)Follow him on Facebook here!http://www.facebook.com/DarylBannerWr...Interesting tidbits: Daryl is also an obsessive piano player, video game enthusiast, and occasional actor. He's been remixing video game music for over fifteen years, and is a passionate Final Fantasy fan. You can feed your ears with many of his remixes (as well as his original music) on his YouTube page "www.youtube.com/DarylBanner". Also, he personally answers all emails he receives, so if you have some strange desire to write him, he may enjoy it. He currently resides in Texas.
Posted by Toni FGMAMTC at Wednesday, July 09, 2014