BUY LINKS AND REVIEWS - HARD TO BREAK BY BELLA JEWEL

SYNOPSIS
Quinn has spent her whole life working in her dad's garage, leaving her more comfortable with a carburetor than a curling iron. Her world is turned upside down when her beloved garage is bought by none other than world famous, sexy as sin, custom car builder, Tazen Watts. He's the one man she can't stand...even though he makes her hotter than a high performance engine in top gear.
Tazen has no use for Quinn, at least not professionally, and he's making sure she knows it. But there's a spark between them that she's finding hard to ignore. She's determined to prove her talent is as impressive as her sassy mouth. When she finds out Tazen is hiding a secret that could bring down his career and everyone involved in it, she wonders: is falling for him is going to be work the risk?
**Hard To Break is a full-length standalone romance with a HEA**
HARD TO BREAK BUY LINKS
Amazon US Pre-Order
Amazon UK Pre-Order
Amazon AU Pre-Order
Barnes And Noble Pre-Order
iTunes Pre-Order
Kobo Pre-Order 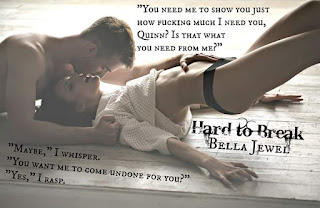 
Tazen Watts is a custom car builder who turns Quinn’s life upside down when he shows up at her garage to buy it out. Quinn has taken over her father’s garage because her father is drowning in alcohol and can’t handle it. Quinn has been working with cars her whole life and the garage is important to her but Tazen doesn’t care and does what he wants.

I wasn’t sure about Tazen at first. He came across as a heartless asshole; he buys the garage out from under her and treats her like a child. I was frustrated with the fact that although she had a team of mechanics, and ran the place, Tazen acted like she was pretending to be a mechanic. Quinn refuses to give up and demands a job but in doing so she has to prove herself to Tazen. I seriously disliked this part. It was very obvious that Quinn was good at what she did, I was unhappy with the fact that the story had to go in the “girl trying to prove herself in a man’s world” route.

Quinn had her moments of acting like a silly girl around Tazen (as a lot of Ms. Jewel’s heroines do) but for the most part I liked her. I warmed up to Tazen a little and he came through in bringing Quinn into the fold. I liked the progression their romance took. They are hot for each other but they also start to open up and learn about each other. Bella Jewel tends to rush her stories but in this case I thought she did well with the pacing. Quinn and was pretty funny and I liked the scene where she had a little Q&A with Tazen.

I felt the situation with Sheyenne fizzled out; I was expecting something big to happen with her and didn’t go anywhere. All in all I did enjoy Hard to Break and I definitely liked it more than Hard to Fight.

ABOUT THE AUTHOR
Bella Jewel is a self published, USA Today bestselling author. She’s been publishing since 2013. Her first release was a contemporary romance, Hell’s Knights which topped the charts upon release. Since that time, she has published over ten novels, gaining a bestseller status on numerous platforms. She lives in North Queensland and is currently studying editing and proofreading to further expand her career. Bella has been writing since she was just shy of fifteen years old. In Summer 2013 she was offered an ebook deal through Montlake Romance for her bestselling modern day pirate series, Enslaved By The Ocean. In 2015 she signed a three book worldwide deal with St Martin’s Press – and happily joined the Macmillan team to produce some scorching, sexy, amazing stories that will be presented to the world from August 2015 onwards.
She plans to expand her writing career, planning many new releases for the future.
Posted by Diva Discussions Book Club at Wednesday, October 14, 2015