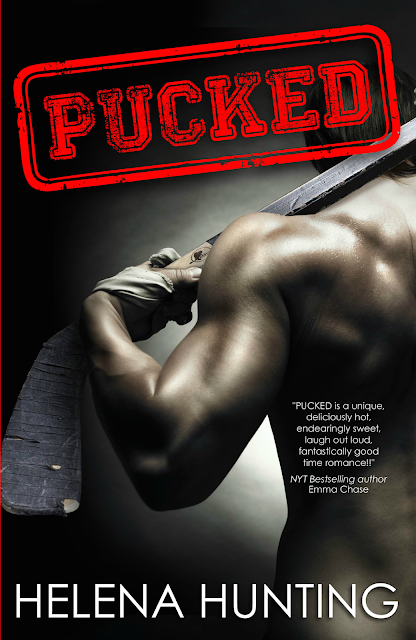 I pull my sweater over my head, not accounting for static, and my T-shirt sticks to the

woolly outer-layer. Face covered with fabric, I scramble to pull the shirt into place. The silence

at the table is telling. Once I wrestle free of the sweater, I’m met with a number of wide eyes

focused on my chest. I look down. Right. My bra is visible through the pale pink cotton, and now

everyone at this table, including Buck, has seen it unfiltered by the shirt.

Buck leans in and whispers, “Put the sweater back on.”

“Everyone can see—” He motions toward my chest without looking.

He shoots me one of his glares. It’s meant to be threatening, but it makes him look

constipated. I leave the sweater off to irritate him. It’s effective. His face turns an interesting

“I need another beer.” He slams his mug on the table and eyes me as he gets up and goes

to the bar, despite the half-full pitcher of beer on the table.

I’m about to put the sweater on again when Waters turns to me.

are something else, though, even if he is sporting the makings of a black eye. I try hard not to

look directly at him, afraid I’ll be ensnared by his rugged, handsome face.

“I didn’t realize Butterson had a sister.”

Even his voice is familiar, satin smooth and deep. He takes a sip of his drink, leaving

behind a milk mustache he quickly wipes away. It’s then I realize where I recognize him from:

the milk advertisements. Sweet Lord, I’ve been jilling off to him. My mortification reaches new

heights, causing me to say something more insane than usual.

“I’m his stepsister. He likes to keep me a secret since he wants to go all Ophelia on my

ass.” My eyes widen at my terrible joke. Though, if he’s anything like Buck, he won’t get the

I swear he’s made an accurate reference to Shakespeare. Stunned, I make direct eye

contact. Or I try to. His eyes keep bouncing between my chest and my face, so that’s a challenge.

Normally, I’d be put out by his blatant ogling, but I’ve asked for it with the sheer shirt

and the ostentatious bra.

I further my own embarrassment and his by cupping my breasts and squeezing. “They’re

nice for real ones, huh?”

His eyes shoot to mine. Busted.

sex in ages. I make a snicker-snort noise and look away.

Buck leans against the bar, talking to a girl whose skirt is so short it’s abundantly clear

she’s not wearing underwear. I nudge Alex with my elbow. His arm is like a rock. “Check out

The timing couldn’t be more perfect. Cooter-flasher leans forward and gives our table an

“Is that—am I looking at her beaver?”

Mid-swig, I choke on the mouthful of beer, sputtering and coughing. After I recover, I

ask jokingly, “‘Beaver’? Are you Canadian or something?”

Likes inches away, rock arm brushing mine close. I can even smell his cologne or

deodorant—whatever it is, he smells yummy.

He’s silent for what seems like a long time. Or maybe it’s because I’m staring. Or the

question may have stumped him.

to the assertion that hockey players aren’t notoriously intelligent. I’m aware this isn’t a universal

truth. But Buck certainly reinforces my perceived stereotype: he’s definitely not a rocket

scientist. He’s not even a rocket scientist’s assistant. However, I’m almost positive Alex made a

literary pun a moment ago. Waters could very well be an unexpected anomaly. I’m intrigued.

“Does everyone in Canada call pussies beavers? Like the Brits call them fannies?” I can’t

believe I ask him this. I’m barely buzzed; otherwise, I’d blame it on drunkenness.

It’s possible his helmet wasn’t up to code and he sustained a head injury during the fight.

There’s a sweet bruise on the side of his chiseled jaw. His nose is crooked with a decent bump

from what I imagine could be multiple breaks. It’s not ugly, though. It’s sexy, in an I-fuck-

“No, I said ‘pussies,’ plural, as in more than one.” I’m making a complete ass out of

To avoid saying something worse, I excuse myself so I can pretend to smoke. I grab my

bag and sweater and leave the beer. Based on the crap coming out of my mouth, I don’t need to

add any fuel to that fire.

Buck grabs my arm as I pass him. “Hey, what’s with you and Waters?”

Alex is shrugging into his jacket. Maybe he’s leaving. Too bad; he was fun to talk to and

nice to look at.

I sigh with irritation. “It's common courtesy to strike up a conversation with the person

sitting next to you, or did you miss the rules of social etiquette in kindergarten?”

“Never mind. What else am I supposed to do? Ignore him? I was being polite.” And Alex

“Yeah, well, I don’t know these guys that well yet and he’s got a rep. Be careful who you

“I wasn’t giving him a handy under the table. We were talking. I’m going for a smoke.”

Leaving him with the Beave, I head for the door. The temperature has dropped in the past

half hour, so I pull on my sweater. Finding my smokes, I pop one between my lips and search for

my lighter. I can’t find it anywhere.

“Need a light?” I pull my head out of my purse to find Waters holding a pack of matches.

“Are you following me?”

He shrugs and gives me a grin that could obliterate my panties. If I were dumb enough to

allow myself to be affected in such a way. I’m not. Mostly.

I purse the cigarette between my lips. Alex strikes the match and curves his palm to

protect the flame. He watches while I inhale, the embers burning orange as I take a shallow drag

“Shit!” Tears spring to my eye as I eye toke the smoke. Swearing like a sailor, I cover my

eye with my palm.

“Only when I try and smoke with my eyeball,” I say between coughs.

Alex tosses the matches on a table and pats my back until I stop hacking up a lung.

Through the window I spot Buck and the Beave. She’s not pulling the selfie business, so

he doesn’t seem to mind her hanging off his arm while he glares in our direction. He’s being a

“Screw Buck.” I take a fake drag of my cigarette.

“Do you even smoke?”

I debate lying and decide against it. “Not really. I do it as a way to escape awkward social

“So you came out here to get away from me?”

“Not you in particular.”

His tongue peeks out to sweep across his bottom lip. He’s got a nice mouth, even with the

split in the corner. Remembering the way he took out the Atlanta guy makes me warm all over.

Thoughts such as these are bound to get me into trouble. Hockey players are bad news.

Especially ones as hot as he is.

He’s looking at me expectantly. Dammit. He must have asked a question. My mind is

“Sorry, what?” I flick the ash on my cigarette.

“You were reading during the game—what book?” He sounds genuinely curious and a

“Tom Jones. I have to finish it for my book club on Tuesday.”

Wow. Do I ever sound like a winner. He must have been watching me while he was in

“Fielding at a hockey game? Kind of cerebral with beer and violence, isn’t it?”

I blink as if I’ve been high beamed with a flashlight. Alex knows who wrote Tom Jones,

and he’s used the word cerebral in the appropriate context. I was right; he did get my

regarding the inferior intellect of hockey players—with one sentence. In doing so, he’s become

infinitely hotter than he was five seconds ago.

“You’ve read Fielding?” I take a step closer. My voice is low, as if I’ve switched into

sport the same one when I inadvertently revealed my extreme nerdiness. Most nights I would

much rather be at home curled up with a book or playing solitaire than out at a bar. Hence the

“I think literacy is sexy,” I whisper.

“Me, too.” His dimples make an appearance.

out of character. It’s so outside of my personal code of conduct that I’ll probably relive the

incident over and over trying to figure out what flipped the switch. For the time being, I’m

blaming the beers, jetlag, and his accurate literary references.

I grab Waters by the shirt and pull his face to mine.

His mouth is soft and warm. The stubble on his chin scratches my skin, and I like it. I

shove my tongue into his mouth. Well, that’s not true. I slide it across his bottom lip, touching

He tastes like chocolate and, more faintly, coffee liqueur.

His hand runs a hot trail along my side, and he pulls me tight against him. He’s all hard

After far too short a time, he breaks the kiss, trailing his lips across my cheek to my ear.

“Buck will kill you.”