Reviews Beyond Innocence, Beyond series by Kit Rocha 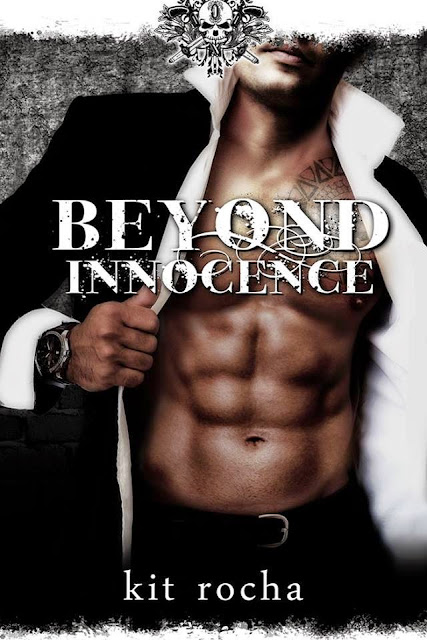 For years, Jared has existed on the fringes of both Eden society and Dallas O'Kane's Sector Four gang. He travels between these worlds, protected by his money and power--money he earned selling his body, and power that comes from knowing secrets. He's untouchable—until he starts a new life gathering intelligence for the O'Kanes.

Lili Fleming walked out of Sector Five with a gun, the bloodstained clothes on her back, and an icy determination to survive. She finds herself in a world where people live hard and love harder, and nothing's more terrifying than how much the O'Kanes wake her up, make her feel—especially Jared.

Emotion is a risk he can't afford, and a complication she doesn't need. But neither can resist the lust simmering between them, and the sparks that could either melt the ice around both their hearts…or get them killed. Because the only thing more dangerous than loving an O'Kane is loving a spy.

It's always good to be back in Sector 4. We get Jared and Lili's story this time around. Lili's finally having to feel things, no longer able to conceal her emotions with drugs. Jared is now working for Dallas, albeit covertly. Lili is having a hard time adjusting to the O'Kane lifestyle, as she was always taught that women didn't enjoy sex and that men used it to control women. Jared tries to open Lili's eyes to the fact that O'Kane women aren't oppressed and that the women are really in control, especially during sexual encounters.

Rachel befriends Lili and also helps to show her that the relationships in Sector 4, especially Rachel's with Cruz and Ace, are very much normal and enjoyable. There is one particular chapter that is especially hot with Rachel, Lili, Jared, Ace and Cruz.

There is some danger, as Jared works covertly to try and gain information for Dallas. Lili wants to help Jared with his work, but he won't allow it, which also causes some strife in their relationship. Lili shows Jared that she can handle it, but he still needs some time to work through his issues of being protective, but also allowing her to flourish.

Overall, the book was good; but it just didn't pull me in as much as the previous books did, which is why it was rated 4-Stars.

**ARC received for my honest review**

This time, the whore and the Ice Princess get their HEA.

Lili has had it rough, all throughout her life. She relied on drugs to keep her going. Until she escaped, got taken into Sector 4 by Dallas, and realized she doesn't need them anymore. Of course, her dulled senses came roaring back to life. We all know the O'Kanes are all about making one another feel good.

I've always liked Jared. There was no change in this book, though he was a tad bit stubborn about keeping Lili in the dark about things, to protect her. Men. But I liked how she made him realize she's stronger than she was when she first arrived to Sector 4 and doesn't need any coddling.

However... something was missing and I can't figure it out what. Of course, this is all on me, how it made me feel.

4 stars. I don't know whether to look forward to the next one, even though it's finally gonna be all about my baby, Mr. Adrian 'Maddox' Rios and his... lovers. I honestly would have wished for him to end up with only Scarlet because you can really feel something whenever they're in the same scene together. Or when you read their POVs. But I guess we'll see.

***Copy given by authors for honest review. Thank you***