SHIFT OUT OF LUCK


There are few things that are off limits to the were-bears of Pine Falls, but humans are one of them. Which is a real pain, because I’ve had it bad for curvy Adelaide Laurent ever since she sashayed into town. The fact that she’s forbidden fruit just makes my fantasies all the sweeter.
But when she signs up to go on a weekend camping trip with the town’s biggest player, it’s time for a bear to step in and claim his mate.
I don’t care if it breaks the rules. She’s mine, and it’s time she knew it.


Life’s given me the short end of the stick on looks – I’m big, ugly and brutish. Normally I wouldn’t care about the packaging except for the fact that the woman of my dreams is Ryann Brown, a human half my age and so lovely she makes my body ache. What’s a were-bear to do in this situation?
Whatever he can to forget her, of course.
Except Ryann’s not taking no for an answer. And when she catches me watching her one night, she gives me a show I’ll never forget. Did I think I’d be able to walk away and not touch her? Not claim what’s mine?
Not a chance.

GET YOUR SHIFT TOGETHER


I’ve been looking for a mate in all the wrong places. When the right one shows up in Pine Falls with a man in tow, I almost miss her. Caroline Abbott is a sweetheart of a city girl who is making one last stab at keeping her (dead) relationship together. When her fool of an ex takes off and leaves her alone in the forest, I’m more than happy to step into his abandoned shoes.
While I can make her shout with pleasure, I worry those screams will turn to fear when she realizes that my hidden half is a bear.
I can’t keep the secret much longer, but telling her might scare her off for good.

DOES A BEAR SHIFT IN THE WOODS


I’m a loner for a reason. I don’t have much in the way of social skills. I’d rather sit on my deck and watch the sunset than hit a tavern with coworkers. My idea of grooming is to trim my beard with a straight blade when it hits my collarbone. I can’t put two words together in the company of a pretty woman…and they don’t come much prettier than wolf-shifter Madison Thorne.
She’s everything I’m not—outgoing, easy on the eyes, and sweet. There’s no way I’m convincing her to come home with me. Fortunately I don’t have to. Maddie seems to like my gruff, unpolished self. At least, she likes me enough for one night.
The problem is getting her to stay forever.

GET YOUR SHIFT TOGETHER

I nod, biting my lip. I’m eager for him, and waiting any longer seems torturous. I wiggle out of his grasp and slide down onto the blankets. His big body immediately covers me again, and he kisses me before rearing up on his knees to slide the condom on. Even though it’s dark inside the tent, I admire the outline of his form. He’s just so…delicious to look at. I want to run my mouth over every inch of him.
In the morning, maybe, when I can admire him by daylight. Right now, I just want him back on top of me.
As if he can read my mind, Leo leans back over me, and I feel one of his big thighs nudge between my legs. He leans in to kiss me, and as I wrap my arms around his neck, he puts a hand to my knee and parts my legs. His cock presses against my pussy, and then he rubs the head of it through my slick folds.
I moan against his mouth because that feels amazing. Each time the head of his cock grazes my clit, I nearly jump out of my skin with pleasure.
Then he pushes inside me, and I gasp at how big he feels. “Leo!”
“I’m right here, Caro,” he murmurs, nipping at my jaw with tiny kisses. “I’ve got you, baby.” He continues to whisper sweet things even as he begins a slow, delicious rhythm, stroking in and out.
I raise one leg and lock it around his waist as he pushes deep into me. The force of his thrust shoves us over the blankets, and I gasp.
“Too much?” He asks, freezing over me.
“No! Keep going!” I slap a palm against one thick, sweat-dewed arm.
He growls low in his throat, almost animalistic, and then the fucking goes up a notch. If I thought Leo was fierce in the sack before, I’ve seen nothing before now. His every stroke makes my entire body jiggle with the force of his thrusts, and I’m clinging to him for dear life, soft cries escaping my throat. An orgasm begins, low in my belly, and I’m startled because I’ve never come without a bit of clit stimulation from a boyfriend, which means I usually don’t get to come. But Leo’s cock is hitting me in all the right places, and each thrust seems to wreck me, inside and out. I dig my nails into his skin and scream, head thrown back as the orgasm blasts through me, my entire body clenching and stiffening with the force of sensation.
He growls again, and his thrusts become wild as he anchors me against him and fucks me harder. “Mine,” he snarls low in his throat. I want to agree with him that I’m all his, but all I can do is choke out a gasping response, still locked in the throes of my orgasm.
When he comes, he snarls my name, and I feel a curious sort of possessive pleasure to hear that. His weight pins me down to the blankets as he catches his breath, and I slide a hand up and down his sweaty back. I just like touching him. He feels so…solid. Physical. I love it.
He leans forward and captures my mouth in a fierce, quick kiss. “I’m going to get rid of this condom and then I’ll be back.”
“Okay.” The moment he leaves the tent, I contemplate getting a towel out of my bag, wetting it, and cleaning myself up. I’m sticky between my thighs, and I really hope the condom didn’t break.
But Leo returns quicker than I anticipated, and the moment he does, he pounces on me, all kisses.
“I should clean up,” I say breathlessly, even as he pulls me against him, his big arms locking around me.
“Nope,” Leo says. His hand goes between my legs, sending aftershocks of pleasure skittering through me, and I gasp when he pushes two fingers inside my swollen tissues and strokes them. “I like you covered in my scent.”
“You’re a strange man,” I say with a chuckle.
“You have no idea.” He kisses my temple and snuggles me against him, but I notice that his hand stays between my legs in a possessive gesture, as if he’s guarding what belongs to him. “I want you to come stay with me for a while. You said you can work from home, right? Come work from my home.”
Oh, wow. “You don’t think we’re going too fast?”
He snorts. “Not at all. I’m not about to let you get away.”
Strange, indeed. 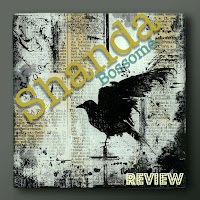 Shift Out Of Luck (Bear Bites #1)
4 STARS - Shift out of Luck was a fun read. This story is about Cole ( bear shifter ) and Adelaide, the curvy woman he has watched from afar for three years. Cole is scared of hurting the human Adelaide so he has stayed away. Adelaide is just as attracted to Cole but has pretty much given up hope. After finding out she is going alone in the woods with a sleazy tour guide Cole's bear decides it's time to claim his mate.

If you like fun, short, and smutty reads that suspend reality you will enjoy this. I don't care much for smut anymore but Ms. Dixon did a good job. These weren't so gross that I rolled my eyes or gagged and using the shifter/pnr aspect helps the story along for me.
Get Your Shift Together (Bear Bites #2)
4 STARS - Get Your Shift Together is the story of Leo the country boy ( bear shifter ) and Caroline the city girl. Caroline is in Pine Falls on a last ditch effort to save her dying relationship by going on a camping trip together. After her douche bag boyfriend leaves her stranded in the woods Leo comes to her rescue. Leo is the fun loving playboy type but after spending time with Caroline he quickly realizes she is his mate. They were cute together. As with all of these stories they are fun, fast paced, smutty reads. These are great stories for when you want a sexy and cute read.
Shift Just Got Real (Bear Bites #3)
4 STARS - Shift Just Got Real is Mal's story. Mal was sweet and made me a little sad. He has been lonely a long time. He found his mate Ryann years before but she was way too young for him. All Mal wants is a mate but he is big and he feels he is ugly. So with his insecurities and Ryann's age he feels doomed to be alone. Ryann returns to town after an absence,she has always liked Mal and after discovering he wants her too she makes her move.
This story had a lot of Daddy dirty talk so if that your thing you will like this one. Again another fun read in the series.
Does a Bear Shift in the Woods (Bear Bites #4)
4 STARS - Does a Bear Shift in the Woods is the first shifter on shifter book in the series. Chance is a bear shifter who doesn't believe in mates. Madison is a wolf shifter that is gun shy of relationships after being burned but she is prone to falling fast and hard. Chance is a dom and Madison is a natural sub so they were pretty hot together. After one night Madison is done ( to protect her heart ) and Chance realizes he wants to keep her for his own. Chance trying to win her over was really cute. I loved the gift he tried to bring her to prove he wanted her, it had me LOL'ng.
This was another fun read in the series.

Ruby Dixon is the seekrit pen name of a NYT and USA Today Bestselling Author. Under Ruby, she writes naughty, fun stories about sexy bikers and aliens.