Monster in His Eyes by J. M. Darhower 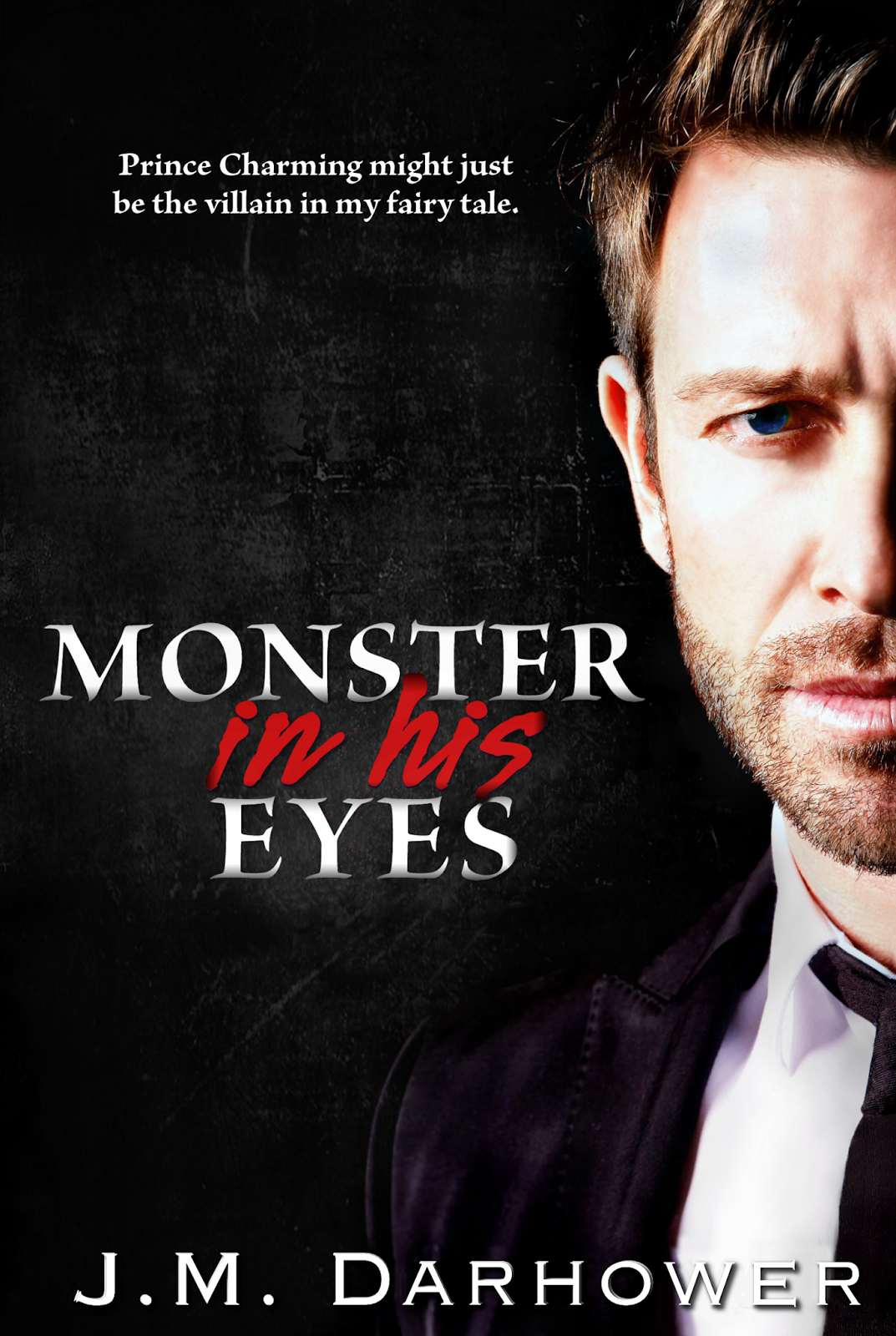 Monster in His Eyes
by
J. M. Darhower

This is my mood music, my selection for Naz & Karissa.
Please press play (NSFW/explicit lyrics) and listen while you scroll down and read this review. 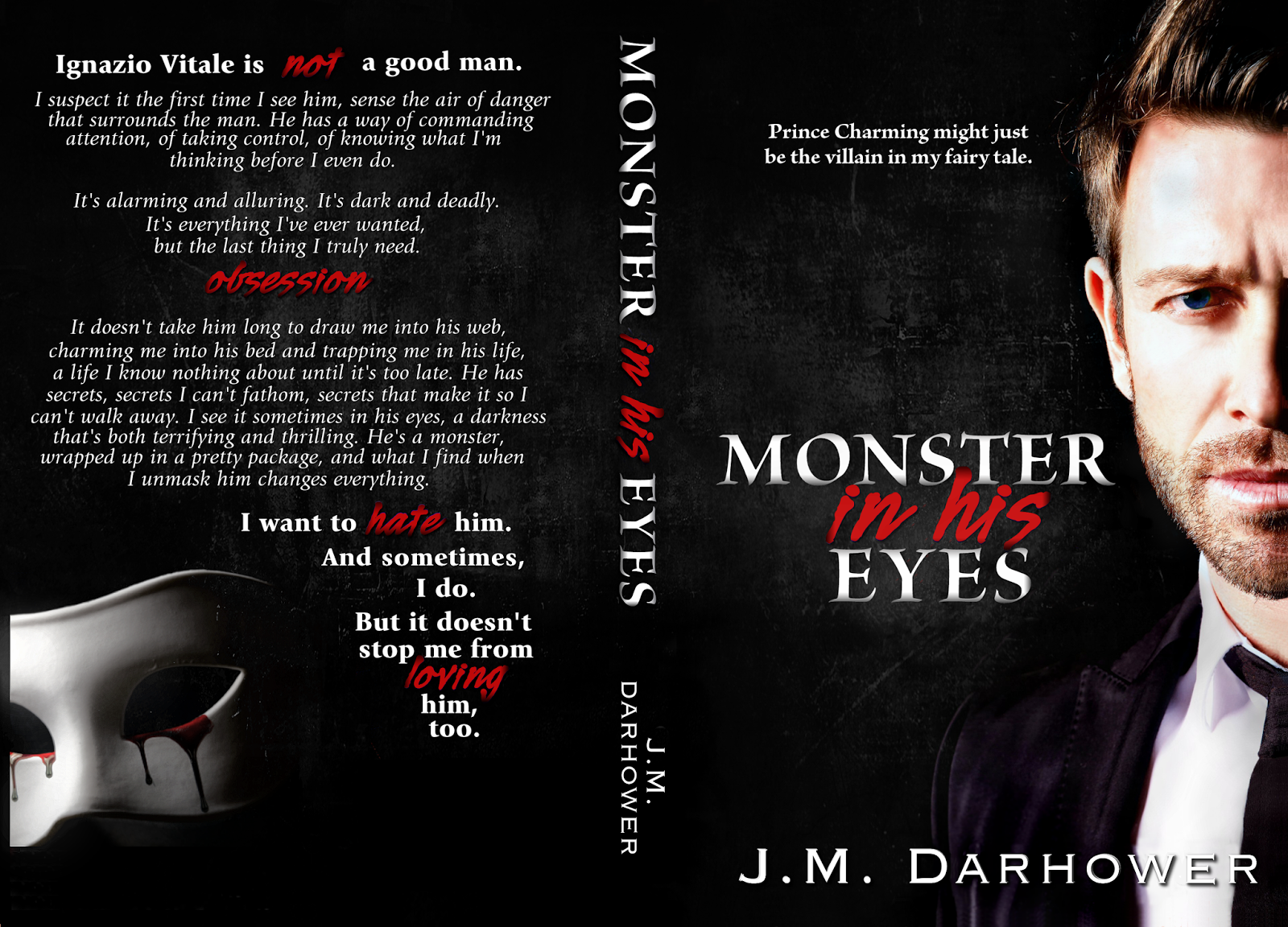 Ignazio Vitale is not a good man.I suspect it, the first time I see him, sense the air of danger that surrounds the man. He has a way of commanding attention, of taking control, of knowing what I'm thinking before I even do.It's alarming and alluring. It's dark and deadly. It's everything I've ever wanted but the last thing I truly need. Obsession.It doesn't take him long to draw me into his web, charming me into his bed and trapping me in his life, a life I know nothing about until it's too late. He has secrets, secrets I can't fathom, secrets that make it so I can't walk away, no matter how much I beg him to let me go. I see it sometimes in his eyes, a darkness that's both terrifying and thrilling. He's a monster, wrapped up in a pretty package, and what I find when I unmask him changes everything.I want to hate him.Sometimes, I do.But it doesn't stop me from loving him, too.

Haven Antonelli and Carmine DeMarco had vastly different childhoods. Haven, a second-generation slave, grew up isolated in the middle of the desert, her days full of hard work and terrifying abuse. Carmine, born into a wealthy Mafia family, lived a life of privilege, never having to answer for anything he did.

Both now seventeen, a twist of fate causes their worlds to collide, making them question everything they ever believed. Entangled in a web of secrets and lies, they learn that while different on the surface, they have more in common than anyone would think. 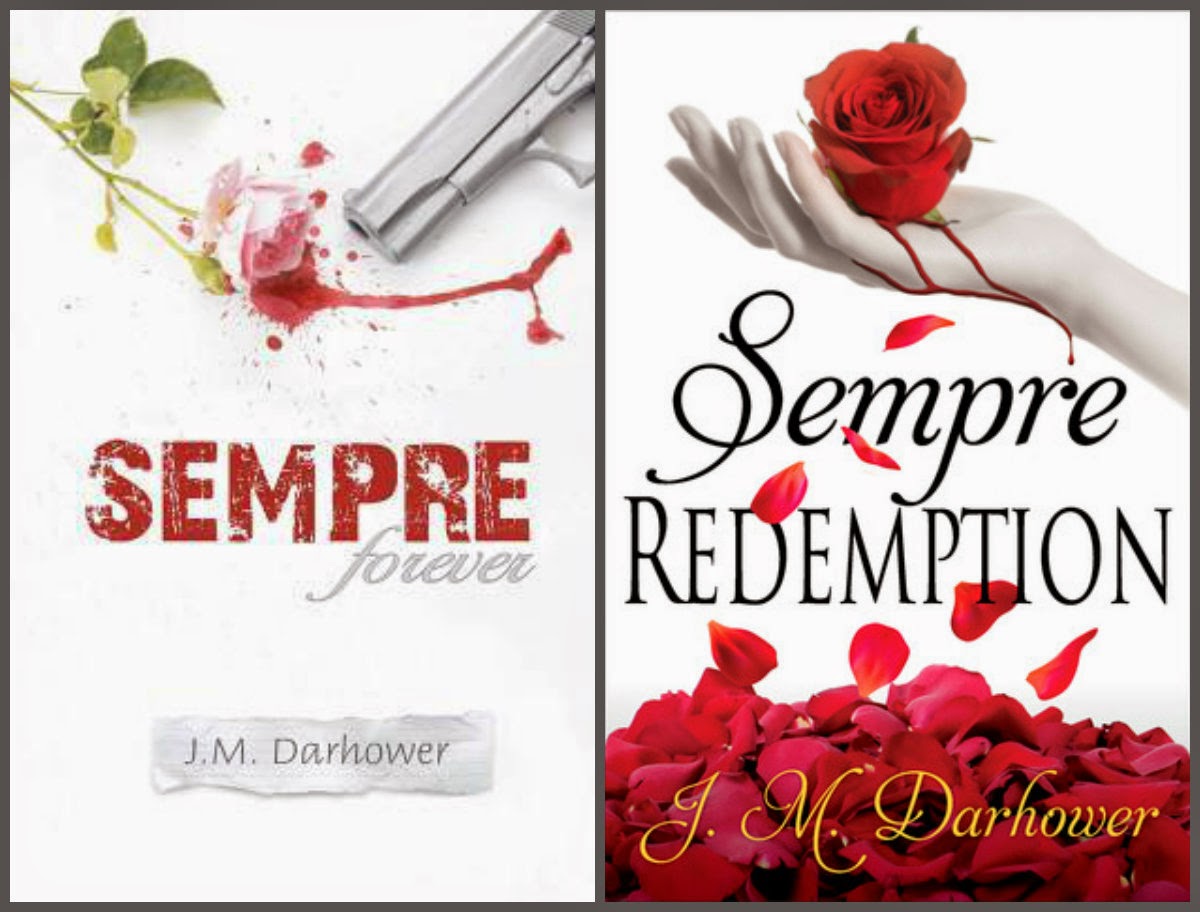 by J.M. Darhower
In this thrilling and sexy follow-up to Sempre, two young lovers struggle to keep their relationship intact after they become deeply enmeshed in the dangerous mafia-run crime ring they once tried to overthrow.

Haven Antonelli and Carmine DeMarco have been through a lot. Haven was taken in by Carmine’s father, and with his family’s help, she escaped a gruesome fate. However, saving Haven from the dark intentions of a mafia family cost Carmine a steep price: he was forced to swear loyalty to them.


Now, still passionately in love, Carmine and Haven must face the fall-out of Carmine’s forced service, as Haven discovers terrifying secrets about the family that enslaved both her and her mother—and why she matters so much in this intricate web of lies.

JM Darhower is the author of the New Adult Sempre series (Sempre & Sempre: Redemption), and the paranormal romance novella, Extinguish. She lives in a tiny town in the Carolinas with her family, where she churns out more words than will ever see the light of day. She has a deep passion for politics and human rights, and when she isn’t writing she’s usually ranting about those things. Chronic crimper with a vulgar mouth, she admits to having a Twitter addiction. You can find her there. 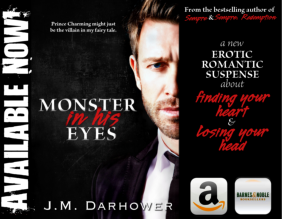 Monster in His Eyes by J.M. Darhower
My rating: 5 of 5 stars

JMD is quickly becoming one of my favorite authors. I thought this book was excellent through and through. It's one of those books that I wish I could unread to be able to read it again for the first time.


Karissa is 18, in her first year of college and away from her over protective mother for the first time in her life. She's cute and maybe a little quirky as shown by her unstylish signature boots and scarfs. She had an odd childhood, constantly moving from place to place with her paranoid mother. Karissa is naïve to the darker parts of life and people.

Naz is 36, on an unstoppable path in life and in a situation he never contemplated. He's dark, mysterious, exciting and sexy. Bits about his past are dropped during the story. Knowing the real Ignazio Vitale casts a different light on every scene that came before it. And it makes all of the emotions mean so much more.


I see the darkness on the surface, I'm reminded that this man hangs out with monsters. And one might even exist inside of him.


The story is told more from Karissa's side so we have parts just about her and parts with them together. Karissa is basically swept off her feet.


"Have you ever been with a man, Karissa?"

Naz is a work of art, confident in every aspect, and it's certainly warranted. I just lay there, my body made of jelly, while he towers above me like fortified steel.

I'm fucked.
Literally.
Figuratively.
The man has fucked me in every sense of the word.


Naz is an all or nothing type of guy. Once he commits there is no going back. I respect that he's always honest and upfront in how he portrays himself. The following statement says it all.


"I'm telling you," he says, his voice strained. "I'm warning you. I'm not a good man, Karissa, and I never will be. So don't think you can fix me, or that I'll ever change, because I won't. I can't. You have to know, if this goes any further, if you ask me to stay, I'm not going to be able to let you walk away."


Naz is one of those bad boys to which you just can't help to succumb. I fell right along with Karissa.


It burns deep, raw passion and desire mixing with the purest agony.


And the sex scenes were blazing. I think my kindle almost caught fire.


Even though I would have loved this book just for Naz, getting to the end and having everything click in to place reminded me why I love J.M. Darhower's books. Great writing has depth, not just a straight storyline, but many side stories, layers and extras. I love how pieces on philosophy are thrown in and especially the broad spectrum of people from which the philosophical wisdom come. Naz is going on my top book boyfriends list (He can dominate me any day) and Monster in His Eyes is going on my top books of 2014 list. I'm looking forward to book 2.

But of course, you had to know it was coming from me, extra credit for the mention of Harry Potter.


"Okay, what about this one?" Melody says, holding up and index card with something in Latin written on it: modus tollens.
"Modus tollens," I say out loud not sure if I even pronounced that right. "It's, uh, one of Voldemort's people in Harry Potter."


I loved it and I recommend it. 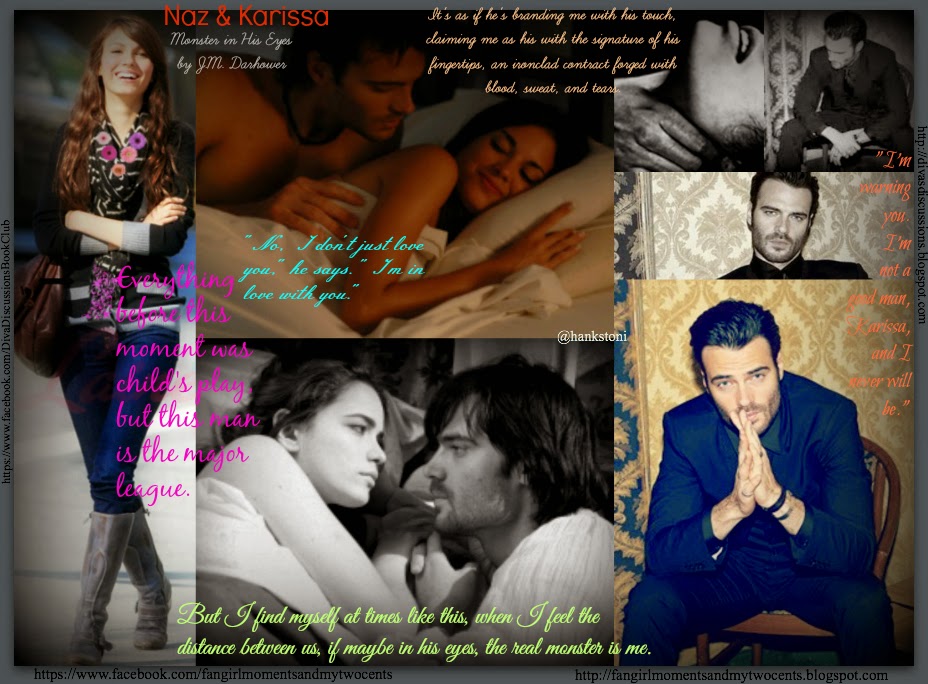