Review The Darkest Torment, Lords of the Underworld series by Gena Showalter 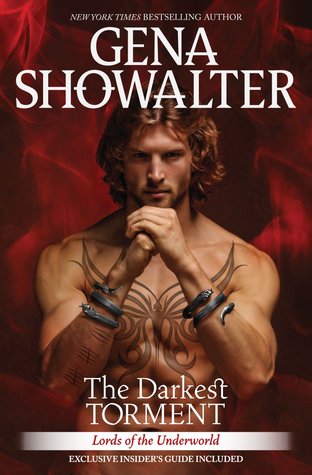 Driven to his death by the demon of Distrust, Baden spent centuries in purgatory. Now he's back, but at what cost? Bound to the king of the underworld, an even darker force, he's unable to withstand the touch of another...and he's quickly devolving into a heartless assassin with an uncontrollable temper. Things only get worse when a mission goes awry and he finds himself saddled with a bride—just not his own.

Famed dog trainer Katarina Joelle is forced to marry a monster to protect her loved ones. When she's taken hostage by the ruthless, beautiful Baden immediately after the ceremony, she's plunged into a war between two evils—with a protector more dangerous than the monsters he hunts. They are meant to be enemies, but neither can resist the passion burning between them...and all too soon the biggest threat is to her heart.

But as Baden slips deeper into the abyss, she'll have to teach him to love...or lose him forever.

***Before you go on reading this review, know that I may slip in a spoiler or five. It can't be helped, they may be needed to prove points.***

I have been waiting for the next LotU book with bated breath. Like other major LotU fans, I'm sure. So many questions and no answers! This book took its sweet time, I have to say.

Now, I didn't immediately read it, upon its release. Why? After waiting two years, I didn't want to read it because I knew I'd finish it way too fast and then what? I'd be left with more questions and more scenarios in my head. Because there are so many ways a LotU book can go - as Ms. Gena Showalter had already proven this to us. I didn't always agree with the direction the story went.

I'll be honest, I wasn't all that excited about Baden. I tried to understand but couldn't. Why Baden? Why not Cameo? William?

Can't say that I still got it, 100% but I went with it. I got more of my precious Lords. They're really special to me and was happy that they played minor roles in this book as well.

Thing is, this book is like a major detour from the original plot. That goes to the background, while this one focuses on Baden - obviously - but Hades too. I was happy that it focused on William and Gilly too, though I still don't know what to think of THAT twist thrown in - I know a wake-up call was needed, for William to DO something but man, poor bastard!

Baden. I didn't like him much, at first. Or his girl, Katarina. I didn't like how they treated each other. He constantly told her she was too weak - 'scuse me, Mr. Big, Bad Immortal, some are just mere mortals but strength isn't always about how well you can knock someone on his ass - while she treated him like a dog that needed training. That's right, you read that right. Okay, so I sort of got Baden. He was dead for thousands of years, times changed etc. But Katarina? I just couldn't get her. She confused me, most of the times and wasn't all that endearing.

So, putting all of that aside, secrets are revealed and it kind of shows us what to expect in the next book. Or we could guess, truth be told. One never knows with Ms. Showalter. Hence why the rating kept climbing or falling. It started at 5 stars because I was just so giddy to finally, FINALLY delve back into this world - which kind of changed, due to the whole different plot thing, but eh - but then it went to three stars - the whole Baden & Katarina back-and-forth - but I decided on a 3.5 because I liked this different plot, it just goes to show that there are still a few books to come, in the series, which makes me crazy happy.

Are Baden & Katarina my fave couple? No. My fave will always be Strider & Kaia.
Did it feel like this was a fill-in in the series? It's with a heavy heart and I'm sorry to say this, but yes.

Unfortunately, something was missing. That je ne se quois from the LotU books. I hope I'll get to feel it in the next one. 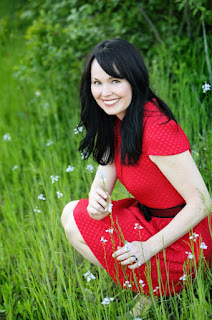