Review Storm of Ecstasy, The Guardians of the Realms series by Setta Jay 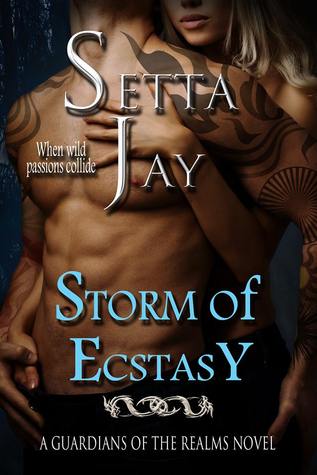 As the son of Hades and a Guardian of the Realms, Pothos has been gifted with immense power to protect the inhabitants of the four Realms of Earth. When the evil God Apollo is stolen and the Guardians are forced to wake Hades from his sleeping confinement, P is faced with a long held dangerous secret; that he was born of two worlds. Learning that his mother was a Priestess from the unknown world of Thule, Hades also confesses that P has been kept hidden from all who dwell there as his very life is in danger the moment their Gods learn of his existence. As P struggles to make sense of the life he has lived and what this means for his future he finds himself forcibly pulled into Thule by an unstoppable divine force. Bracing for attack, he instead finds himself faced with a threat of a different sort, a beautiful golden Goddess who calls to the very depths of his soul.

Gefn is a Goddess of Thule, dedicated to the preservation of her world. A world constantly faced with wildly shifting energy left behind in the wake of warring Gods. Haunted after witnessing the brutal murders of her closest friends, her Priestesses, she has lived a life of relative loneliness but for her few remaining siblings and her pair of giant, magical lynx gifted to her at birth. They are Guardians of Thule and her most trusted companions. When they lead her to a hidden garden outside her missing sister’s palace she is shocked to find a winged male who calls to her most primal desires, unleashing her power in a way that sweeps her into a passion she’s never known. His sudden disappearance leads her and her brothers into a tense and deadly standoff in another world.

As both worlds collide will Pothos and Gefn’s unique mating end in his death? Or will the strength of their love help them survive a storm of ecstasy as they uncover more secrets that could save them all?

I was really excited about this book; the series is getting more and more complex and you're holding your breath, while reading, thinking what next?

Storm of Ecstasy gives us more information, more answers and I loved that. I loved how the side characters were there too, playing a major role. Especially Hades - who cracked me up like crazy! He is still my favorite, I have to admit.

On the other hand, just like with Searing Ecstasy, I didn't feel the connection between the two main characters, Pothos and Gefn. I felt the lust, yes. But not when they fell in love. I get that the mating frenzy drove them constantly crazy with lust and they just had to cave and all, but I actually ended up skipping the scenes with them because there was only sex. I felt like the story was only moving along, the action was playing out only when the side characters were present.

But I still liked it, I actually can't wait for the next book because it's bound to be intense. These last few books were less intense, they were more fast-paced. You can notice it with this one, too.

3.5 - 4-ish stars. I know others absolutely loved it, so don't let my review sway you. This is just my opinion, since I was given a copy in exchange for an honest review. Thank you.