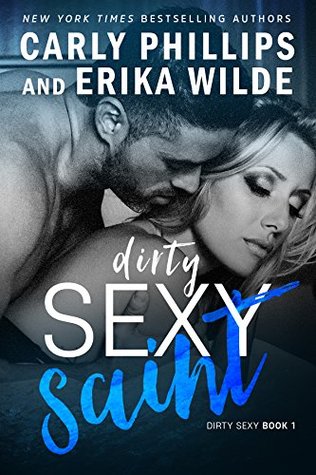 Are you ready to get Dirty Sexy with a Saint?

Clay Kincaid knows he's more a sinner than a saint. Especially when it comes to women. With a rough and damaged past that has left him jaded, he doesn't do committed relationships. But he does like sex—the hotter and harder, the better. He likes it fast and filthy, which is why he refuses to even touch someone as sweet and guileless as Samantha Jamieson. Until he discovers that she likes it just as down and dirty as he does. Let the sinning begin . . .

"He had a bit of a bad-boy edge to him that tempted the good girl in her to take a walk on the wild side."

I loved this book. Plain and simple. I love Carly Phillips' style and I realized I also like Erika Wilde's.
Three brothers that never had it easy, especially the hero of the first book, Clay. He's the father figure to his younger brothers, he was the one that sacrificed and pulled and pushed hard to make it.
And make it he did. I guarantee you'll fall hard for him. All three boys, as a matter of fact.
And the heroine, Samantha, is a girl after my own heart. When she realizes she will never have a say in how her own life is being run, she up and leaves, deciding to make it on her own, when she's never had to lift a finger before. Meeting Clay changes both of their lives and thus begins the push-and-pull between them. I wanted to shake some sense into Clay but he quickly comes to his senses, so all's well.
It's a fantastic start to a new favorite series of mine. 5 stars. The Kincaid brothers are all book boyfriend material.

"I'm not a gentleman, Samantha," he said harshly. "I don't do soft and gentle and sweet. I like to control and fuck so hard and deep you'll scream and be sore the next day. I'd want you on your knees, with my hands fisted in your hair while you suck my cock, and then I'd bend you over this table, spread your legs wide, and fuck you all over again." 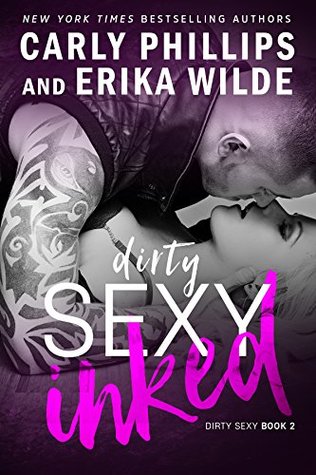 Breaking hearts is what wild and rebellious Mason Kincaid does best. Hit it and quit it is his motto, and with his bad boy reputation and tattoos, he doesn't lack for female companionship. Until one hot night with the one woman he swore he'd never touch becomes an all consuming addiction he can't kick. Katrina Sands has been his best friend for years, but now that he knows what she feels like, and tastes like, there is no going back to being just friends. Hot, dirty sex has never felt so good...or so right.

Book two is with the middle Kincaid brother, Mason. The heart-breaker. The man-whore. He never had a girlfriend, he never stuck around after sleeping with a woman. It all comes back to the things he had to go through, when a kid. To say the Kincaids had a nasty childhood is putting it mildly.
But he tattoos for a living and he's happy being a love-'em-and-leave-'em type, until he goes to Vegas for his brother's wedding and the inevitable happens.
Now, Katrina is our kick-ass heroine. She's Mason's best friend, they've known each other for years and have always been there for one another. Except, Katrina loves Mason more than a best friend should. Nope, he doesn't know. Takes Mason a little to catch up with how things are but then it's full throttle ahead, and he won't let her go.
I'm giving this one 4 stars. Really liked it. 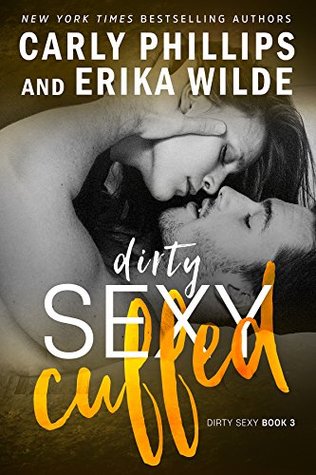 As a cop, Levi Kincaid is all about discipline and control . . .in the bedroom, and out of it, and he's always been very careful about choosing women who abide by his rules. Hot sex and intense pleasure? No problem. Emotional commitment and forever promises? No way. But he never anticipates falling for a blue eyed angel who makes him want to cuff her to his bed and do dirty, sexy things to her. And that control of his? It doesn't stand a chance against Sarah Robins, the one woman he can't resist . . .

Holy mother, was this one the hottest book of all three! I mean, Clay and Mason are dirty mofos and boy, can they make a girl fan herself but Levi? Ladies, Levi Kincaid is all that, times three. I should have known that the quiet one, the introvert one is the kinkiest and dirtiest of them all.
Officer Kincaid. Let me tell you, Sarah is one lucky lady!
But putting that aside for now, this one is my absolute fave because it had more than the previous two. More feels. It was hotter, funnier, swoon-worthier. It was more, more, more.
Levi is also the one that had it the worst of the brothers, but I won't tell you more, you will have to read the book, see for yourself. Really, do yourself a favor and get all three and read them.
There's a fourth on its way and I CAN'T WAIT to read it because oh boy, the ending to book three! *gasp*
Yes, of course I'm giving Levi and his story 5 stars and I really want to thank both authors for teaming up to write this series. It's definitely a fave of mine and it's definitely on my best of 2016 list.

New York Times and USA Today Bestselling Author Carly Phillips N.Y. Times and USA Today Bestselling Author Carly Phillips has written over 40 sexy contemporary romance novels that today's readers identify with and enjoy. After a successful 15 year career with various New York publishing houses, Carly is making the leap to Indie author, with the goal of giving her readers more books at a faster pace at a better price. Her Serendipity books will still finish up in January/February 2014 via Berkley as planned. Carly lives in Purchase, NY with her family, two nearly adult daughters and two crazy dogs who star on her Facebook Fan Page and website. She's a writer, a knitter of sorts, a wife, and a mom. In addition, she's a Twitter and Internet junkie and is always around to interact with her readers. You can find all information about Carly at her website and other social media sites ...

Erika Wilde (aka Janelle Denison) is the USA Today bestselling author of over 50 contemporary romances for multiple print publishers.