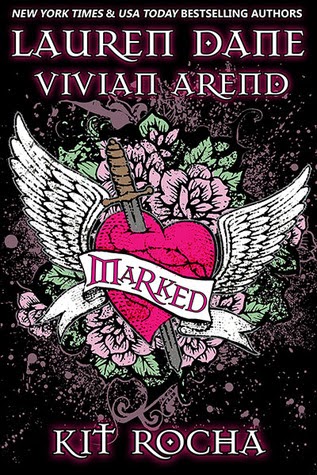 New York Times and USA Today Bestselling author Lauren Dane takes you into a brand new world in ALL THAT REMAINS. Summer Killian falls fast and hard when Charlie arrives in Paradise Village. But the heat turns all the way up when she learns Charlie is also with Hatch - the man she loved three years before. While she's not sure she's cut out for a triad, neither man is going to give her up.

Take a ROCKY RIDE with New York Times and USA Today Bestselling author Vivian Arend as she leads you back to the Six Pack Ranch. Anna Coleman might be the law around Rocky Mountain House, but bad boy Mitch Thompson knows that under the stiff RCMP uniform is a woman with a passion for speed and pleasure that matches his own, and he’s not giving up until she’s his.

Kit Rocha returns to Sector Four in BEYOND TEMPTATION. A promise to a dying friend backfires when Noah Lennox finds that the girl he was supposed to rescue is all grown up--and wearing O'Kane ink. He wants to protect her from the secrets of their past, but she wants him. And an O'Kane woman always gets what she wants.

Lauren Dane has been writing stories since she was able to use a pencil, and before that she used to tell them to people. Of course, she still talks nonstop, and through wonderful fate and good fortune, she’s now able to share what she writes with others. It’s a wonderful life!
The basics: Lauren is a mom, a partner, a best friend and a daughter. Living in the rainy but beautiful Pacific Northwest, she spends her late evenings writing like a fiend when she finally wrestles all of her kids to bed.

Vivian Arend in one word: Adventurous. In a sentence: Willing to try just about anything once. That wide-eyed attitude has taken her around North America, through parts of Europe, and into Central and South America, often with no running water.
Her optimistic outlook also meant that when challenged to write a book, she gave it a shot, and discovered creating worlds to play in was nearly as addictive as traveling the real one. Now a New York Times and USA bestselling author of over 30 novels and short stories in both contemporary and paranormal genres, Vivian continues to explore, write and otherwise keep herself well-entertained.


Review Beyond Temptation by Kit Rocha

We’ve been introduced to Noah Lennox and Emma Cibulski in Beyond Pain, where we found out that Emma is Ace’s apprentice and Noah surfaced to help Six and Bren out.


Noah and Emma have history. They grew up together and were friends. Particularly Noah and Emma’s brother, Cib. But everything kind of went to hell when Cib was murdered. You see, Cib had done things he shouldn’t have and pissed off people one shouldn’t piss off.


Noah did his best to get Emma out of Sector Three and he dumped her in Sector Four, thinking she would be better there. Fast forward four years and the nineteen-year-old innocent became a woman. Emma was dancing on stage in the Broken Circle. Emma had become Ace’s apprentice, mastering his skills and doing what she knew best: drawing. But what Noah noticed as soon as he laid eyes on her after four years was that Emma wasn’t so little anymore. Or innocent.


Emma had become a woman. An O’Kane woman, to boot.

Emma had always had feelings for Noah. A childish crush that hadn’t gone away, as the years passed. She still loved him and seeing him was a shock for her, since she hadn’t heard of or from him for years.


But Noah was back because Dallas O’Kane needed him and his brain. But he was scared and he knew things Emma didn’t. But he loved her and would do anything to keep her safe. And all Emma wanted was an equal and a partner, not just a lover.

In this novella, we get to know Noah and Emma better. We get to see old friends, like Dallas, Lex, Jasper, Noelle, Bren, Trix and Ace. We get to feel the O’Kane love – both as a family that sticks together, no matter what and at a typical O’Kane party.

I loved it. Five stars, as usual. The Beyond series keeps getting better and better. Kit Rocha manage to keep us interested and wanting for more. Yearning. Craving. I, for one, would do anything for an O’Kane shot! The sex scenes are hot and wow, Noah may be a geek but he has a certain dominating and possessive side. And Fight Night is something I expect to read about in every book because it’s hot!


I love the O’Kane family. Because that’s what they are. A big family. Dallas is still feared but highly respected by all and even from the short scenes he features in, we feel this power of his, he oozes it. And Lex is proving to be just as strong. Jas and Noelle hadn’t changed and the latter still likes to play. Bren is still the hardass ex Tactical Officer, through and through. Ace? Still the party animal.


So you see, things don’t really change in the O’Kane household and thank God for that!


“If he can get me the intel I need, I’ll bury him in all the willing pussy he wants.” ~ Dallas, always the giver

“Get on your knees, sunshine.” ~ Noah

“You were a smart, sweet girl. But you’re a filthy-hot, tough, amazing woman. You’re a partner. My partner.” ~ Noah


***ARC given by author in exchange of honest review***

It’s taken the girls a couple of books in the Beyond Series for us to finely get a taste of Noah Lennox.  And do we ever, not your typical geek squad here.  Our boy Noah likes his women dirty, really dirty.  Of course that is the only thing Dallas O’Kane deals in, really fucking dirty.

Four years ago, Noah paid for Emma’s freedom into the mountains, but things don’t always end up like they should in the Sectors.  Emma Cibulski, to her Noah was her brother’s best friend, her first love, but he left her, so she could have a better life.  Enter Dallas O’Kane, leader of Sector 4 and newly appointed leader of Sector 3.  Dallas offers Emma a better life as an O’kane, a life that has had her happy, but with only one thing missing:  Noah! 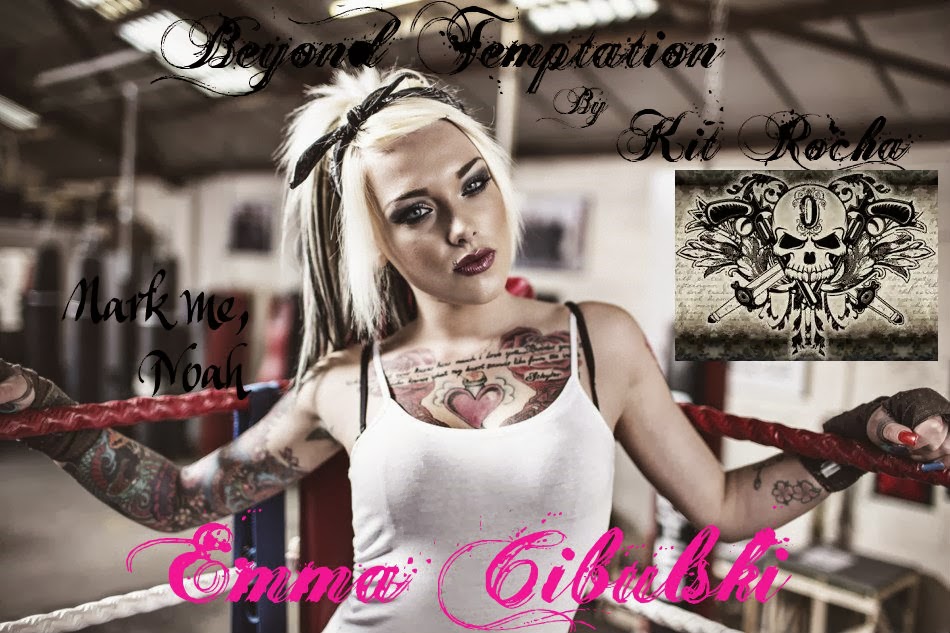 In true O’Kane fashion, this book is ballsy, sexy and yes, dirty;  as only Kit Rocha can write.  Loved the start of Noah and Emma’s story, looking forward to the next Beyond in the series.  Summing up with this:  Marked by Noah. 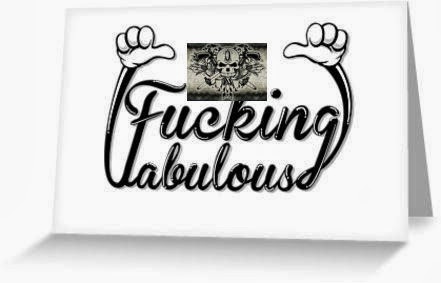 I've been looking forward to the 'MARKED' anthology since it was announced that it was coming out!

The main draw in the beginning for me was Kit Rocha's 'Beyond Temptation' - I adore the 'BEYOND' books and was excited to read the new novella in the series (which is one of my Top 5 series EVER)!! - but as I read through the book I realised that I'd found another author who's books I'm just gonna love!!!


Beyond Temptation (Beyond series #3.5): Kit Rocha
LOVED, LOVED, LOVED IT!! Gods, Emma & Noah's story was way hotter than I expected it to be and added a great plot arc to the whole series... Looking forward to watching this play out!
Have to say that I've got a little thing going for the 'new boy' in Sector 4!

'Beyond Temptation' has loads of action and a few twists that keep you gripped and the sex, as always, just about causes spontaneous combustion!!!  Noah and his secrets about events in both their pasts & Emma's reaction to revelations made had me wanting to shake both of them at times....
The attraction and heat between N & E was intense - exactly what we've come to expect from the KR girls and this series!!! Can't wait for Beyond Jealousy - just know Ace, Rach & Cruz's story is gonna blow our minds!!!


Rocky Ride (Thompson & Sons series #1): Vivian Arend
I have to be honest and say that while I've had a couple of Viv's books on my kindle for some time now I've never got round to reading them.... that will be resolved VERY soon!!! 'Rocky Road' was a fantastic read and a fab start to the new 'Thompson & Sons' series. With characters from Vivian's 'Six Pack Ranch' series, this book was full of heat, passion and sexy scenes. The relationship that was growing between Anna & Mitch was scorching and my heart was aching reading about how much they are prepared to put on the line to be together.....
Itching to read 'Baby, Be Mine' book #2 in the series!!


All That Remains: Lauren Dane
I've read a couple of Lauren's 'Visits to Petal' books and thoroughly enjoyed them!!
'All That Remains' was an incredibly hot, erotic & sexy read but it also had a very sweet feel to it.
I loved Charlie, he was my fave character of the triad. I totally understood Summers uncertainty and why she held back from Hatch after their past history.. Hatch, even when being a complete idiot is still irresistible!!
I really loved the whole dystopian style world that this story suggested. Being back to basics and living a simple life gave focus to what was really important between the 3 characters.
I'll definitely be 1-clicking more of Lauren's books.

***WELCOME TO THE BROKEN CIRCLE*** 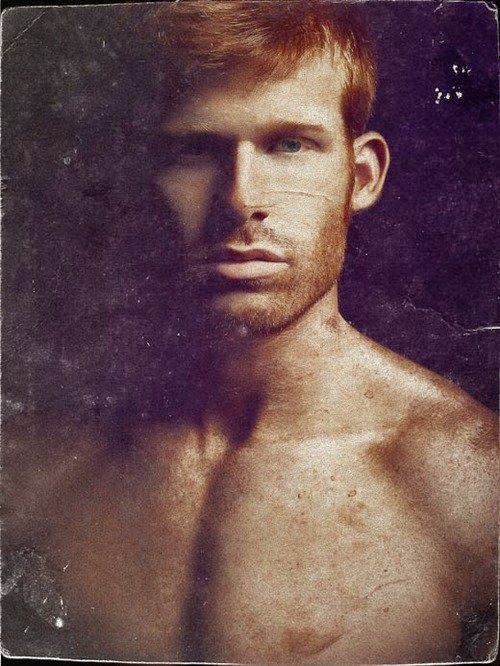 Those who know me, know i LOVE techy/geeky men...and ooooh my, Noah is the sexiest gingeriest, geekiest techy around!!!

Emmaline "Emma" Cibulski- tattoo apprentice to Ace, has definitely come into her own. Not only is she an artist with a needle, she is an artist on the stage, and can absolutely hold her own!

These 2 light up the pages! The chemistry is wicked and the whole time you're like "COME ON ALREADY!!!"

But they DO NOT disappoint, and neither does this book!!!

I totally have a girl crush on the women that are Kit Rocha! they rock my world!! xx