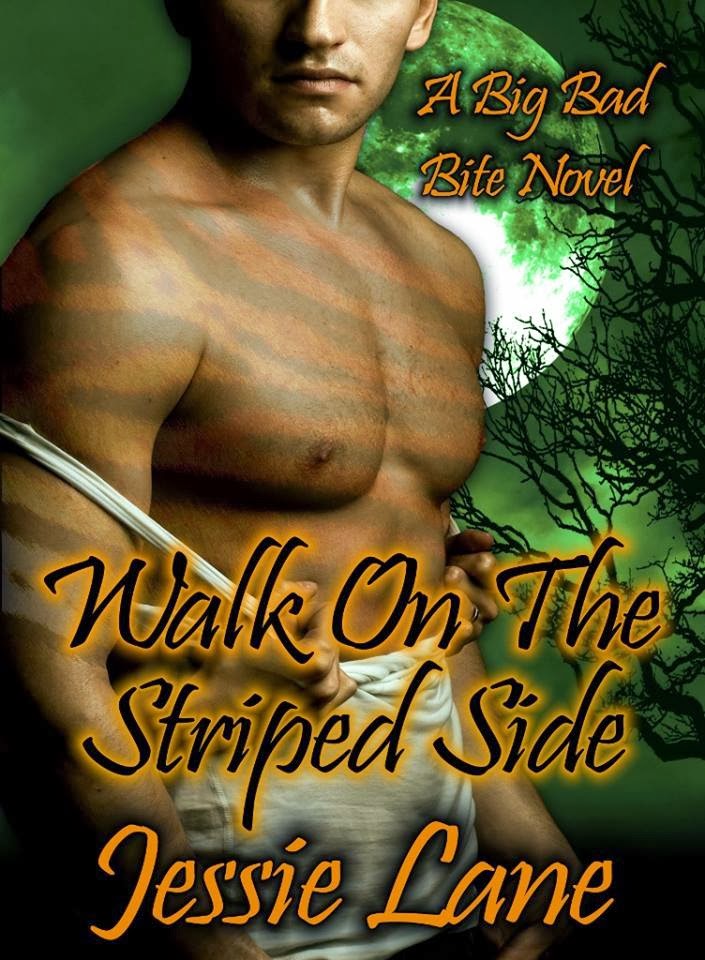 WALK ON THE STRIPED SIDE

JESSIE LANE
"Does he have his claws in her for good? Or is she just yanking his tail?
Elena Demos’s life has been turned upside down. Her mother has passed away, leaving Elena and her two half-sisters to deal with their mother’s will and the crazy stipulations it contains. For the three sisters to inherit the substantial amount of money left behind, they have to go to work with two aunts they’ve never met, in the family business they’ve known nothing about, Amazons Inc. If that isn’t bad enough, she runs into the man who once broke her heart, and it’s only their first day on the job.
Gage Ivanov is a stupid beast. He let the woman who should be his mate go because she couldn’t be told of his Other identity. Now, Elena’s back, but she refuses to give in to his demands for her to be his mate. The timing for all of this couldn’t be worse, either, because Gage and his circle of friends are trying to subdue a rogue pack of wolf shifters in Germany who threaten to out the Others to the world of humans. Will he be able to juggle the oncoming conflict and win back his mate?"

Claws have never been this sexy.

Jessie Lane is the writing team of Crystal and Melissa. The two sisters-in-law share a passionate love of naughty romance, cliff hanging suspense, and out-of-this-world characters that demand your attention, or threaten to slap you around until you do pay attention to them.
Crystal lives in Kentucky with her husband and her two little Rock Chicks in the making. Melissa lives in Minnesota with her husband and two fur babies, Yuffi and Lolo. Crystal is now trying to talk Melissa into “polar bear” swimming in Lake Superior, but so far Melissa is adamantly telling her no.
They write YA/NA & adult paranormal romance as well as adult contemporary romance.


BOOK 2 ~ WALK ON THE STRIPED SIDE

I read a preview of a book called Big Bad Bite just by chance about a month ago, it intrigued me so I one clicked. I really enjoyed it and I loved Adam and Jenna but will confess when Gage and Alec came onto the scene I wanted Jenna to be with one of them - what can I say, I'm a sucker for tiger shifters who are tall , built and hawt!
'Walk On The Striped Side' is Gage and Elena's story ~ it's well written & full of humour and I laughed out loud many times no matter where I was (cue the strange looks in my direction!!! )
Jessie Lane gives us a funny hot alpha male, a sassy strong slightly psychotic heroine and a back-up cast of characters that are phenomenal. Who couldn't love Chloe and her addictions ~ hey, we'd all fight for our Jimmy Choos!!! ~ man-whore Alec whose hotness factor is just growing and growing, Babushka with her complete annihilation of the english language (batter of baby made me howl) and the spider, I have no words for that poor spider.
Throw in flame throwers, guns, catnip and toys and you have a really funny book with every ingredient you need for a few hours of total easy enjoyment. I am looking forward to the next book 'The Demon Who Loved Me' and i just know there will be sparks a-flying between Chloe and Kent.............