First of all, let me tell you that this book, this series - Strings being the first book - comes with a warning and after you read said warning and feel up to the wild ride, then you won't be sorry.

I was shocked in the most wicked way when I first read Strings. I'm not one to shy away easily, not everything is my cup of tea but Kendall Grey and her Hard Rock Harlots? They are. Letty Dillinger is the one to introduce us into this series, along with Shades. They show us how two bands merged and became one. How they started down on the road towards fame, doing what they loved and knew best.


Beats is about shy, little Catholic girl, Gianna. Coming from a big, loud Italian/Southern family, she's used to not getting any attention and she considers herself to be a chameleon. There's one thing she loves more than her drums and that is her baby brother, Mikey. Her autistic, socially awkward but prodigy brother. He masters the piano like nobody's business, as if it's a part of him. And Jinx wants to do the same thing with the drums but ever since stumbling upon Toombs and Rax having a private moment on the couch, things changed. She couldn't beat the drums, she seemed to have lost the beats.


Toombs is the former drummer, current guitar player in the band. He's the silent, brooding type. You can't read anything by looking at him. You have no idea what he's thinking, what he's feeling. But we find out he has this Dom/sub relationship with his best friend and band member, Rax. He seems to have feelings for Jinx too but when she see them on the couch, it changes everything for him because he doesn't want her to see him like that, to know that part of him. Jinx may not understand it but he submits to Rax because he wants to. Besides, their history plays a major part in their relationship and it's hard for him to throw away all those years just like that.

Things kind of start deteriorating when Rax shows interest in Jinx and makes a certain proposition for her, knowing that's the only way she'll get to be with Toombs, whom she silently loves. After their night together, he comes back for more and finds the tool to make her agree to another night together.


My heart broke for Toombs, for the way he finds out about Rax's lies and betrayals. But by losing Rax, a necessary evil and drug he couldn't seem to live without, he gained Jinx. Their road is bumpy but they make it work.

I have to say, Letty does not disappoint in this part either. She still has a funny way with words and has funny advices to give to Jinx but she can be deep, as well.

"Love is a completely different, much more complicated animal. Love is like music. You have to work at it. Love is ugly and dirty and painful sometimes. But it can also be pretty fucking awesome once you figure out how to play the right notes to the right rhythm." ~ Letty


Toombs is by far, my favorite drummer, ever. Besides liking drummers, in general, I like this character because he is more than meets the eye. He's intriguing and we all know that silent types can hold so many delicious and wicked things to themselves and oh, when they let loose!

"I've never been with a man who puts his entire body, his entire being into a kiss, the way Toombs Badcock does." ~ Jinx

"You're the perfect example of the virgin and the whore. Every guy's dream." ~ Toombs

"I'm gonna fuck you senseless, Gianna. I'll dick you so hard, you won't be able to walk for a week." ~ Toombs

And then, before our eyes, he changes into a totally different person.

"I'd carry you up a mountain, through a desert, across an ocean. Anywhere you go, I'm there to hold you up, baby." ~ Toombs

"I love you, baby." His eyes close and he buries his nose in my hair. ~ Toombs


Okay, I'm stopping right here because you have to see this truly laugh-out-loud, sarcastic, yet deep and a little bit dark book for yourself. Read it. You won't regret it.

P.S. Jillian? Love her. Nobody delivers a toast like her!

Jillian passes me a flute filled with bubbly and raises her glass. "To Killer Buzz Float. Most days on this tour, I wanted to smother you all with pillows, but on nights like this, I'm glad I didn't. Cheers."

You can find Beats on Amazon 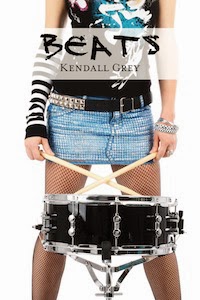 And maybe stalk Kendall Grey on: