The Pulse by Shoshanna Evers 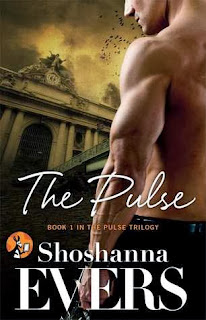 The Pulse, Book 1 in the Pulse Trilogy
Book One in the heart-pounding Pulse Trilogy—a gripping erotic romance set in post-apocalyptic New York City one year after an electromagnetic pulse destroys America’s power grid.
“Intense, exciting, and sizzlingly sexy—a perfect post-apocalyptic romance!”  –Heather Thurmeier, bestselling author of Escape to My Arms and Stuck on You
Emily Rosen lives in a military camp at Grand Central Station, where women sell their bodies to soldiers for extra rations. When she discovers a dark secret—that America is rebuilding outside of New York City, and everything the city’s refugees have been told is a lie—she escapes, the soldiers hot on her heels…
But Christopher Mason, a convict who broke out of prison after the Pulse, finds Emily first. Although he’s survived this long on the streets by looking out only for himself, Emily is beautiful, alluring, and impossible to leave behind.
Now Emily must convince this intimidating, magnetic stranger to be her guide as they journey out of New York and into the unknown. She’ll barter with her body, but sex with Mason can never be currency—it’s pure passion, and everything she desires. Despite the crumbling world around them, can Emily and Mason discover true love blooming in the darkest of places?
The Pulse, Book 1 in the Pulse Trilogy is available now on Amazon, B&N, iBooks, Kobo, Amazon UK, and wherever ebooks are sold!


Review
The Pulse would be categorized as post-apocalyptic dystopian.  It seems to take in present time.  The characters believe, and the reader from the information available to us, that a high-altitude electromagnetic pulse device has knocked out all everything in the United States, including modern vehicles, radios, electricity, etc.  Although, so far in the series, the characters have not made it out of New York state, so we really have no idea what condition the rest of the country and world are in.

Marshall law is in effect, which, in some situations, gives full power to the wrong leaders.  The power is abused.  The ones in charge have all the power and prey on the weaker, especially the single women who have to prostitute in order to eat and survive. 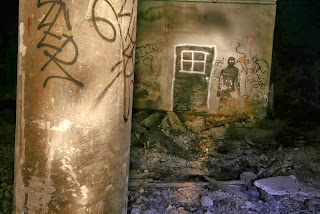 Mason is great at living on his own and making his own way.  He knows if he goes to live with the group he will be executed without question if they find out who he is.  There is a shoot on sight order in effect for all convicts.  Also, he naturally prefers to be a loner.

Emily was a nurse before the pulse.  She tried living on her own, but couldn't make it.  She gets caught by the ones in charge and taken to the New York FEMA center headed by a cruel leader.  Being a single woman, she is taken to the Tracks, a place where single women are used as whores by the soldiers.  Emily finds something being kept secret that changes everything so she makes a run for it.

Mason and Emily cross paths and try to make a go of it together.  She's a nurse so she has a very in demand service during a time when medical aide is almost nonexistent.  He is a big, able, self-sufficient man with a good moral compass which is a must for a woman to make it in the current world.

I read most of this book in one setting.  I like how the author tried to tell it realistically.  The extents they must go, the filth, what is available for food, etc.  I also like how the story was still able to be sexy despite all of the above mentioned.  I'm looking forward to the other books in the series. 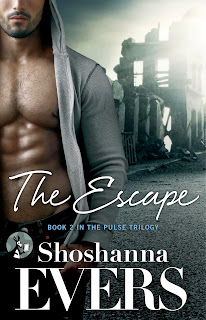 The Escape, Book 2 in the Pulse Trilogy
In Book Two of the erotic dystopian Pulse Trilogy, Jenna escapes New York City only to be tracked down by a soldier who might be her only hope of survival.
Jenna doesn’t know if she believes what Emily and Mason told her—that America is rebuilding and a better life awaits her outside of Manhattan. But with the power grid down and no connection to the outside world, Jenna will die if she stays at Grand Central’s FEMA camp, selling her body to soldiers.
Private Ken Barker is sent to capture Jenna when she escapes—but Jenna knows he’s one of the good guys and tries to seduce him into joining her. Their passionate sex kindles something even stronger than lust between them, and when Barker goes back to Grand Central he sees the horrors there with new eyes.
Now it’s his turn to escape the city, and he knows he must take Jenna with him or she’ll die at the camp. On the road, they’ll start a new life together, hoping against hope that the electricity between them will prove more than just a spark—that together they might finally light up their dark nights.
The Escape, Book 2 in the Pulse Trilogy releases January 13th, 2014 Preorder on Amazon, B&N
The Thrust, Book 3 in the Pulse Trilogy
In the gritty conclusion to the erotic dystopian Pulse Trilogy, one couple undertakes a desperate rescue mission in post-apocalyptic New York City.
Trent Taylor and the people of Letliv, a thriving fishing community on the Connecticut coast, must join forces with the survivors of the FEMA camp at Grand Central to save his sister Annie, who is living on the Tracks as part of the soldiers’ private harem.
Clarissa has spent the past year under control of the soldiers, but Trent’s passionate touch sparks her desire. She’s not entirely sure if she’ll be safe with the mysterious stranger, who still mourns his wife’s untimely death. But with her growing need for Trent, and the danger the women of the Tracks face—Clarissa will have to gather everyone together to fight the rule of the soldiers who keep them prisoner. Could their struggle for freedom—and love—mean an escape from this dystopian nightmare?
The Thrust, Book 3 in the Pulse Trilogy releases March 17th, 2014 Preorder on Amazon, B&N

***ARC was given from author thru Netgalley for an honest review***