Fighting to Forgive by JB Salsbury 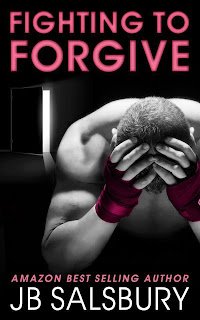 Description
When everything you avoid, turns out to be exactly what you need.
Easy and predictable, just the way he likes it, Blake Daniels flies through life the way he burns through women: on his terms, no regrets.
With his fighting career in full swing, he's on the threshold of title contention. But when his training is compromised by injury, the stakes grow impossibly higher. The rage that fuels his punches also chips away at his focus, and he risks losing everything he cares about.
He won’t let that happen. Not again.
Layla’s through with men. After a marriage that never should’ve happened, she hopes to reclaim the pieces of the woman she lost years ago.
Emotional abuse has left her insecure and terrified. A master at faking what she’s not feeling, she masks her self-doubt in false confidence.
She’ll never let another man hurt her. Not again.
Chased by shadows of the past, Blake and Layla know what they don’t want, but their hearts have a different plan. As a web of lies and betrayal threatens to destroy them, they’re forced to make a choice.
Is love enough to heal even the deepest wounds?
Or will they be left Fighting to Forgive?

Review
Fighting to Forgive is book 2 in a series.  The series centers around a group of professional MMA fighters.  This book is the story of Blake "The Snake" Daniels.  He had a very big role in book 1 so we go into this book knowing a lot about him.  He is a 6'2" ex-Marine Jiu-Jitsu black belt and received his nickname because of his submissions.

Blake had a troubled childhood.  His father, a General in the Marines, was mentally abusive to him, his mother and his brother.  Blake chose to draw his father's wrath to protect the other members of his family until being sent away to military school.  After finally getting out from under his father, he is making his own way in the world of professional fighting and is known as one of the biggest playboys ever, usually taking home 2 or 3 girls together.  He is all about the jokes, never being serious except in the ring.  He's the group's comedian and sex god, often combining for a lewd sense of humor and behavior.  About the only rule he follows outside of the ring is never sleep with a woman who has kids.

When she was 16, Layla woke up after a party beside a guy realizing she had lost her virginity and later finding out she was pregnant.  They married, and he has made her life hell for years.  Her own daughter is now 16, and Layla is finally got the nerve up to leave her husband and make a better life for her and her daughter.  She gets a job working as an assistant to the guy in charge at a UFL Training Center.

That's the backdrop.  Then of course, the shit hits the fan.

I love this series.  Everyone who knows me knows I love my fighters.  The author seems to really know the subject matter so of course that makes the storyline more appealing and flow more smoothly.  Also, the plots are pretty unique.  A lot of the books I read are interesting, but the story seems recycled.  So far, I have been surprised when certain things happened; I didn't already have it all figured out.  I really liked both of the books currently out in the series, but this one was my favorite.  I love Blake.  What a man he turned out to be!  Swoon.