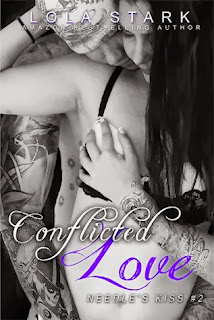 
(Conflicted Love is book #2 in the Needle's Kiss series and should be read AFTER Tattered Love to fully grasp the story.)

Trip’s life motto is simple: get in, get off, get out. His lifestyle works for him, that is until he finds himself in an unexpected situation with the one girl he can't seem to get out of his mind.

Teeny has been strong for too long. One amazing crazy night, with her best friend's cocky colleague, leaves her with more than just unwanted feelings and cravings she just can’t seem to quench.

Life is about to get crazy for two people who can't stand to be close, yet can't seem to pull apart. Tension and confusion turn into mood swings and midnight snacks. How can things ever go back to simple times when every direction leads to chaos?

Twenty minutes late and running out of patience I reached in quickly undid her belt and picked her up, ignoring her squeal of surprise I pulled her purposefully flush against me one hand full of lush ass the other on her hip.

Lowering my head to her neck I took a deep breath in, catching the soft vanilla scent of her blonde hair taking as much as I could get I gently bit her earlobe then ran my lips over the same spot.

“Don’t push me, Princess. I’m clear out of give a fucks and my dick's so hard it could hammer nails. Move that sweet ass before I bend it over and fuck it into oblivion” I growled in her ear driving the point home with a quick swat to her ass.

Making sure her feet were on the ground I let go and stalked for the house adjusting my now very tight in the crotch jeans. I also didn’t miss the soft moan from Teeny before she cleared her throat and mumbled something about assholes and penis trucks then stomped up the sidewalk. 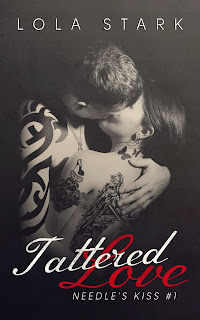 When ex-Special Ops bad-ass Mace walks into Needle's Kiss tattoo parlour, he never expected to find the girl who would turn his life upside down.

Hard as nails Scarlett has been unlucky in love: she’s been burnt, chewed up and spat out. Reluctant to have another relationship, can she keep her wits about her when hot-as-sin Mace walks into her tattoo parlor? Or will he break her down and leave his mark within her ink?

What starts out as a little fun, turns into something so much more.

Can Scarlett look beyond Mace's devastating past or will his demons come back to haunt them both?

Lola Stark lives in . Is an at home mummy with no filter raising a hoard of minions and a husband who sometimes appears not to have grown up. Lola has loved to read for as long as she can remember. When not wrangling the family she can be found sitting at her computer , writing, facebooking or just generally messing around.

Conflicted Love is the second book in the Needle’s Kiss series. We got a glimpse of what it would be about, the main characters, Mace’s brother, Trip and Scarlett’s best friend, Teeny, in Tattered Love.

The epilogue found at the end of Tattered Love left me wanting for more. I liked Trip from the beginning and I knew Teeny was a tough chick and then a baby came into the mix and well, let’s just say Lola couldn’t have written the book fast enough.

Luckily, she took pity on us and released it earlier.

Trip. Womanizer. Slut, as Teeny would say. He’s tall, hot and tatted. He works in Scarlett’s tattoo parlor and he meets Teeny through his boss. He gives Teeny her nipple piercing, along with something else on the side. But one drunken night of finally him saying, ‘Screw it’, he sleeps with her, even though he knew their friendship may suffer because of it. Boy, does it! Teeny. She comes from a family that’s anything but. A mother that suffered of depressions. A father that decided he didn’t want to stick around for it and bailed. I think this is where her fear of Trip stems from. This is a major reason why she doesn’t want to believe that he could change, even with a baby on its way.

But she’s wrong because we clearly see the change Trip goes through, from the initial shock of finding out he’s going to be a dad, to accepting it, embracing it and doing anything and everything he can to help Teeny out. He does everything to make her believe him, believe in him and trust him to be there for her and with her and their baby. The flirty and one-night-only Trip becomes responsible but he still has his funny moments. For example, their visit to the doctor. Or when he says that he is sure the baby is a boy. He was actually scared at the thought of having a daughter that would turn necks and he’d have to break them. Trip is also sweet and cute, with how he shows about truly caring then admitting to falling in love and loving Teeny.  The funniest was the scene from the hospital. All in all, Lola Stark did a good job with this one, maybe even better than with Tattered Love and that’s saying something, since I loved that one. Mace and Scarlett are crazy and perfect for each other.

But then again, so are Trip and Teeny. Teeny may be hormonal and cry at the drop of a hat, but she gives as good as she gets and she’s way too stubborn for Trip’s own good. And of course that at the end of this book we get a peek into the third installment. I really liked it. Four and a half stars.

***ARC received in exchange of honest review***
Posted by Unknown at Saturday, December 28, 2013