Beyond Control, Beyond series by Kit Rocha

Dallas O'Kane. Real name Declan O'Kane. He uses Dallas because of his origins and his mother's rough lifestyle is deeply rooted in him and I believe formed him to be the leader he is. The Big Kahuna of Sector Four, he also becomes leader of Sector Three. You'll have to see how!

Alexa Parrino. She's originally from Sector Two, run by Cerys, trained to be a sophisticated whore. Runs away before getting sold, ends up in Sector Four, where Dallas catches her stealing. The rest is history you'll have to read about.

Stubborn the both of them, they may be in love with each other but they don't necessarily see eye-to-eye. Ever since Lexie set foot in Sector Four, Dallas had wanted her and had had her - physically - but it takes more for Alexa Parrino to yield. Well, not yield per se. That she doesn't do. All she really wants is for them to be equals. By collaring her, he claims her as his. The next and last step would be the ink, marking her as his.

Just another ordinary day in the Broken Circle, for sure.


You can purchase Beyond Control on Amazon US and UK 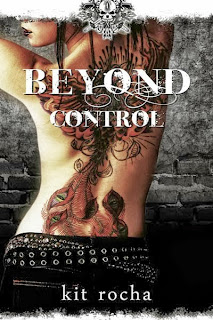 "I'll give you everything," he promised each word a panting rasp as his tempo increased. "Everyone. It's all yours, even me." Especially him.

"I'll be any man you want. A king or a beggar or a farmer or a killer. But I'll never be the man who can let you walk away."