Beyond Shame, Beyond series by Kit Rocha

Eden. When we hear this word, we think of the biblical place, where Adam and Eve lived happily, before Eve succumbed to the temptation and they were thrown out. And well, basically became human beings.

Dystopia. The end of the world as we know it. Chaos.

The two terms are in dichotomy but not is all as it seems. While Eden may seem the perfect place for one to live after everything changes and humanity is forced to start fresh, it also has the feel of Big Brother to it. People may have everything they need to live there but they don't have two important things. Freedom and privacy. The place outside of Eden's walls is called the Sectors and farms. One Sector, in particular, is the strongest.

We can draw a parallel between the biblical Eden and the Eden from the Beyond series. In both, life is good and pretty. Until you screw up, that is. Noelle, an innocent but strong woman is just like Eve. She succumbed to the frowned-upon ways of life and where did that get her? Kicked out. Councilman's daughter or not. She finds herself drugged by a man on the outside but is quickly rescued by Jasper, one of Dallas O'Kane's trusted lieutenants. Noelle is lost and gets taken to Sector Four, where Dallas decides she could stay - swayed by the love of his life/bane of his existence, Alexa - and thus begins Noelle's downfall.

But oh, what a downfall it is!

"The Broken Circle held a seductive promise, with its dark corners and smoky scent."

As Noelle learns and experiences things she never had before, she falls in love with Jasper and it takes a while for them to get on the same page because she doesn't understand why he wants what he wants for her.

Oh, did I mention they have a character named Maddox? I didn't? Well, now you know.

For me, this book, this series is a five out of five. Ten out of ten. I think you get the picture.

You can find it on Amazon UK and US. 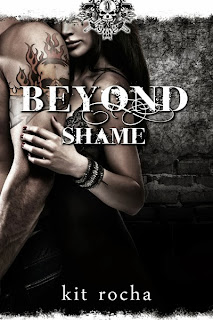