Preservation starts with a very important scene. The reason behind Ryan's, the hero's life going down the drain.

But let's talk about Ryan Campbell, shall we? He's a gorgeous, hazel-eyed, golden-haired guy with a big dream. He wants to become a published author. And he has his chance. But right when the day for him to achieve that finally comes, his world comes crashing down on him. And he loses it. All.

A few years later, he's a professor, teaching Creative Writing. Here's where he meets Kate Parker, a late bloomer, as she called herself.

Kate has her own screwed-up past and a few luggage to go along, hand-in-hand. Her father left her and her mother when she was thirteen and life has changed for her. Moving from California to Seattle, she's looking to start fresh but it's still hard for her. But she manages. She's a strong, independent - maybe a little bit too independent - young woman with only one fault. She's not one to trust easily. Why I don't particularly see this as a fault, per se, but there's just something about being too distant and cold. She does this even with her two best friends, Carter and Dean. But I'll get to them shortly.

Ryan, after the major letdown he'd gone through, had changed. He's a cocky arrogant bastard. Yes, he's a bastard. But he's a lovable bastard. Especially in the end. Oh and he has tattoos. Edgar Allan Poe-themed.


As cold and distant as Kate is and even though Ryan is a cocky playboy that likes fooling around with his students, there's an undeniable chemistry, pull between them and that's just the start of this stormy relationship.

Okay, time to give the mic over to Carter and Dean. Both of them handsome guys, about Kate's age and they're both head-over-heels in love with her but they know there's no chance for Kate to give them a shot so they settle with being her friends, as long as they still get to be a part of her life. They play a pretty important role in the story. At first, they root against Ryan. After that, they root FOR him. Funny and laugh-out-loud both of them, they are a nice addition to the plot. But most of all, they are loyal.

P.S. Dean singing the Pina colada song was the BEST thing I've ever read. I swear. I totally love these guys and can't wait to dive into book 2 and 3.


You can find Preservation on Amazon UK and US. 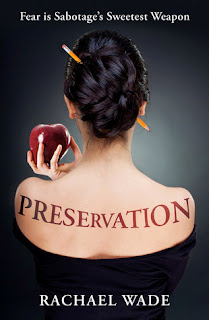 
And because really, Dean knows what he's doing, here's the song that made my day.