Mine by Katy Evans 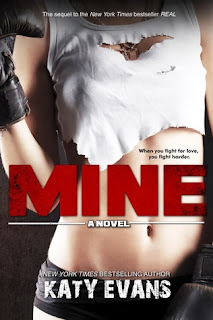 “I will do anything to make her MINE.” —Remington Tate

In the international bestseller REAL, the unstoppable bad boy of the Underground fighting circuit finally met his match. Hired to keep him in prime condition, Brooke Dumas unleashed a primal desire in Remington “Remy” Tate as vital as the air he breathes . . . and now he can’t live without her.

Brooke never imagined she would end up with the man who is every woman’s dream, but not all dreams end happily ever after, and just when they need each other the most, Brooke is torn away from the ringside. Now with distance and darkness between them, the only thing left is to fight for the love of the man she calls MINE.

Where to begin? Mine was truly everything I’ve expected it to be and so much more! It made me smile, it made me melt and tear up and angry. But mostly, it made me love Remington Tate more than ever. I really haven’t realized how much I’ve missed him until I got my hands on him again and read about his sexy, dark broodiness.

The book starts with Brooke having returned to Remy, working for him again and going on tour with him and his team, for the underground fights. He wants to win this time. He wants to end Scorpion this year.

Brooke has changed. She’s insecure and she’s hurt and angry at herself for leaving Remy, back at the hospital and for choosing her sister, Nora, over him. A sister that does not fail to annoy me throughout the novel. Remember how I mentioned the book angered me, at one point? Well, Nora is the reason. And Brooke’s parents.

Speaking of parents… Remy’s parents. I couldn’t believe such cruel and stupid people exist. The things they have done to their own child, just because they didn’t know but they didn’t even care to learn how to help him… It broke my heart. Yes, this was the part that made me tear up. There were others too but you’ll have to read the novel because I’m not spoiling it for you.  You’ll see for yourself.

Melanie is, hats off, the best best friend out there. Due to some ‘complications’, let’s name them thus, Remy and Brooke have to stay separate for a while. So, while Remy is touring and fighting, Brooke is to stay in Seattle. Melanie keeps her company. She also manages to sneak herself and Brooke into one of the fights, when Remy comes to Seattle. That part was hilarious.

Brooke goes through a myriad of emotions and poor thing, she’s so jealous, even though Remy truly loves her.

Of course that Scorpion just HAS to meddle and try and make Remy give up the fight, again. Will he succeed or not, you’ll have to see.

All in all, I truly feel lucky for having gotten the ARC and I cannot wait for more!

I’ve liked Katy Evans from the start, from the short teasers I’ve read from Real but Remy has earned his soft spot in my heart.

Hey! I’m Katy Evans and I love family, books, life, and love. I’m married with two children and three dogs and spend my time baking, walking, writing, reading, and taking care of my family. Thank you for spending your time with me and picking up my story. I hope you had an amazing time with it, like I did. If you’d like to know more about books in progress, look me up on the Internet, I’d love to hear from you!