Rebel. A favorite word of mine. It also characterizes me perfectly. But using it as a name for a hot, tattooed mechanic is the best choice.

But let's start with the beginning. Teagan Cross is a college student with everything one could desire. Things she takes for granted, as she realizes the moment she loses them. The moment life slaps her hard, she has to do everything to make it on her own. And she does. She takes the bull by its horns and tries finding a job, a new place to say. She's a funny, sarcastic girl I'd gladly sit down and have a drink with. She made me laugh so many times and it felt good. She's usual but yet, she's special.

"When you came in that first day, I knew you were special. When I saw you at the club later, it hit me again." ~ Rebel

Teagan is a lucky girl because she may have lost a life she has been living for twenty-two years, but she also found something she never truly had. A family. Quin, her best friend, along with Rebel and his brothers, Colin and Mick.

Rebel. The silent type that doesn't do a lot of talking. He himself admits to be a thinker, rather than a talker. He's intense and sexy and loyal. He grew up in the foster system, along with three other kids. His two brothers and a sister. He was lucky enough to have a mother, a woman, Emily, who loved them very much and took care of them. He's hard working, doing his best to keep the business going and keeping his brothers out of trouble. He's also a guy that likes being in control but hah, Teagan messes that up for him.

"You make me lose control," he says in a low growl.

Did I mention he likes working shirtless?

"He fixes cars and walks around being sexy all day without even trying." ~ Teagan

He's also funny and manages to loosen up with Teagan's help. We all love broody men but we also love it when they can smile and enjoy life.

"We're going to sexty-nine, of course," he says, taking long strides through the room. ---> See?

Really, this book has pretty much everything I like reading about. A crazy but not weak, spineless heroine. A sexy, badass but also softy hero. Add the crazy friendship between Teagan and Quin; Rebel's brothers, Mick and Collin; great sex scene; funny, laugh-your-arse-off moments; a little bit of action to keep you on your toes and on the edge of your seat. The whole package. And oh, what a package it is!

I was so happy to find out it's part a series, with Mick and Collin's books following. Yes, please!

You can find Rebel on Amazon: 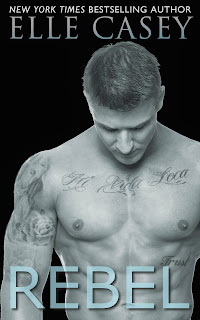 You can show Elle Casey some love and support here: